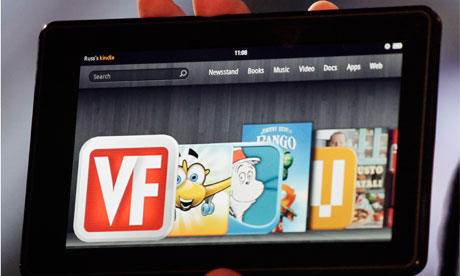 The Amazon Kindle Fire seems to be shaping up to what many had long been expecting and the least what Apple might have been expecting. For the number crunchers, a pre-order figure of more than a quarter of a million within just the first few days should be reason enough for Apple to start worrying. Why not, for when has the world ever got to see a tablet being opted for in such impressive numbers, except of course the iPad whose sales figures has always been quoted in millions.

So what does Apple do? Well a stripped down version of the iPad with a lower price tag might do the trick. In fact, an iPad mini is catching the latest vineyard gossip that’s doing the rounds, one that can take the battle to the Amazon camp before things get out of control for the Cupertino based company. Amazon has managed to shake things up with the Kindle Fire sporting a killer price tag of just $199. If rumor is to be believed, the launch date of the mini iPad is likely to be in 2012. If this is true, then its surely good news for Amazon as it does have the upcoming holiday season to rake up some impressive sales figure with the Kindle Fire.

Brian White, an analyst with Ticonderoga securities however is sure that the iPad Mini would be coming up in the first quarter of 2012 as a mellowed version. It would only thereafter be worked upon and an advanced version rich in features would be available in the later part of 2012. His conclusions are based on the visit he has undertaken to the various manufacturing facilities in China where the components that would make up this Mini device are being manufactured. He also states that the device would not be smaller by dimension but cheaper it would definitely be.

The price tag that he has placed on the iPad mini when it comes to be is $200. It can be expected that the device would have 8 GB of internal memory with looks akin to the iPad 2 as the first model before migrating to the iPad 3 later. Apple has been following the same strategy when it had launched the iPhone 4 and 4S.

“We believe this lower priced iPad could be priced in the mid-to-high-$200 range,” revealed White in a note to investors. “We expect this will be followed by a much more powerful, feature rich standard-priced iPad 3 in (the second quarter of 2012).”

However, if all the above sounds too good to be true, well that’s probably because it indeed is. For a 10 inch Apple tablet costing less than $200 might be too big an ask. Unless of course Apple decides to compromise a bit too much with the tablet’s features while still ensuring it has enough buyers. Also worth mentioning here that Steve Jobs has categorically ruled out tablet devices to be competent enough with 7 inch displays and had famously stated manufacturers of 7 inch tablets should also offer sandpapers to the buyers to sand down the fingers to be able to use such tablets. In any case, this seems to be the signs of the low cost tablet segment attaining a level of maturity with more players coming in to offer a tablet with less bells and whistles but with a lower price.