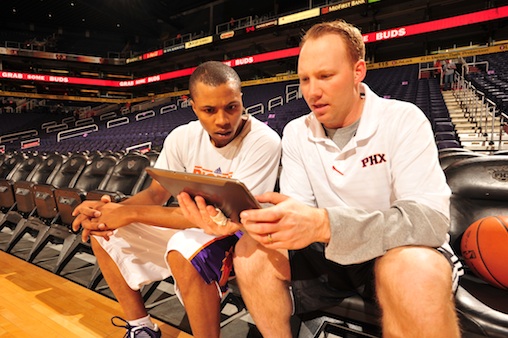 Use of tablet devices in sports would get a major fillip when Phoenix Suns uses the Samsung Galaxy Tab 10.1 tablet for its sessions both on and off the court. NBA franchise Phoneix Suns would be seen making good use of the Verizon 4G LTE enabled Galaxy Tab 10.1 to keep a tab on all their daily operations. The choice of tablet should come as a surprise to many as industry leader iPad has been cold shouldered in the process.

Each player of the team would be provided by their own Galaxy Tab which would come pre-loaded with the Phoenix playbook, video clippings of their practice sessions as well as reports on opponent teams too. Not only the actual games, but the gadget would also help the team in preparing and monitoring their travel itinerary.

Speaking of the latest development, team head coach Alvin Gentry said: “marks the beginning of a new era in the NBA, where I think teams throughout the league will want to integrate a tablet into their operations.”

Other use of the tablet would be to show fans all across the US Airways Center interactive views of the games the team plays. Fans could also view the seating arrangement at the games which would be of great benefit to ticket seekers. There are also plans to integrate this tablet with the popular social media sites so that fans get direct and instant access to the team’s activities.

“Our organization has always placed a priority on remaining at the forefront of digital innovation within the sports industry. Utilizing the Verizon Wireless 4G LTE network to integrate the Samsung Galaxy Tab 10.1 into our daily operations is yet another great digital milestone for the Suns,” said Phoenix’s President, Brad Casper.

This new development should add weight to the Samsung tablet’s flagging fortunes that has come under renewed attacks from Apple all around the globe forcing it to remain off market for a couple of months which includes the crucial holiday period.