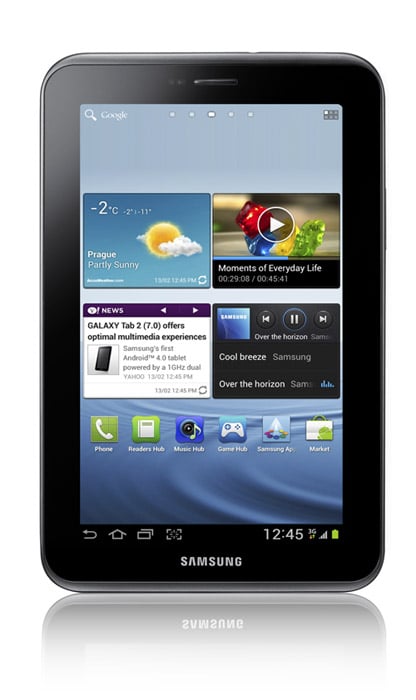 Samsung has just announced a successor to its original Galaxy Tab device, named Galaxy Tab 2, more than a year after the original was announced. As a sign of the changing times, the new Samsung 7 inch unit is now sporting the latest Android 4.0 Ice Cream Sandwich.

The rest of the specs aren’t too ground breaking, though still acceptable considering Samsung plans to launch the tablet an acceptable price tag. The tablet will be powered by a 1 GHz dual core processor, 1 GB RAM, twin cameras, Wi-Fi, 3G, and Bluetooth. The tablet will sport a 7 inch display having a resolution of 1024 × 600 pixels. The tablet will be offered with on-board storage options of 16 and 32 GB with an SD card slot to add for more storage space. A 4,000mAh battery will be providing the juice.

The Galaxy Tab 2 will have the usual TouchWiz application running on top of the Android ICS. Also, the pre-loaded apps include Live Panel, Samsung Apps support, Hub support, Kies Air, ChatON, Allshare Play, and so on. For e-book reading, the tablet will come installed with Reading Life, and you can always source more e-book reading apps from the Good e-Reader App Store.

The tablet is set to reach European markets this March where it is expected to cost around $450 to $550 for the Wi-Fi and Wi-Fi + 3G versions respectively.