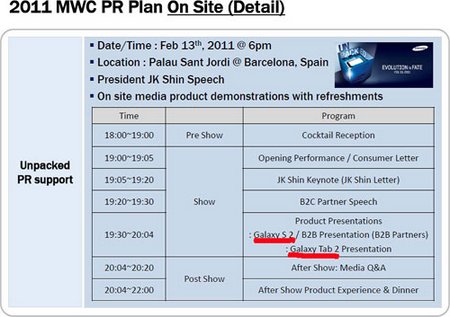 There was a particular video doing the rounds sometime back on the net. The highlight of the video was rumored to be the next generation version of the Samsung Galaxy Tab. While it was good to see Samsung already working on the next iteration of the Android tablet, that was only recently launched and is doing great in the markets, some had cast serious doubt about the veracity of the video itself.

However, this time here is further proof that the Galaxy Tab 2 rumors might in fact be true. For if a recent post at the Samsung Hub Blog is to be believed, the South Korean company is all set to unveil the tablet next week on the 13th of February at the Mobil World Congress to be held in Barcelona.

While it would be interesting to see what the Galaxy Tab 2 will be like, especially after the company has tasted sweet success with the first gen Galaxy Tab, there also are some specifications that many believe will be part of the latest Samsung tablet. The Galaxy Tab 2 will have a bigger 10 inch sized display and will come installed with Android 3.0 Honeycomb right out of the box. What seems certain though is that dual core processors will be part of the next Galaxy Tab, as this is something that Samsung has revealed will be their focus areas.

JK Shin, head of the Samsung Mobile Communications said: “We will continue to keep our technology leadership this year. In terms of dual-core applications, we already have a program, and next month at Mobile World Congress we will unveil it.”

The real thing will be there to be savored on the 13th of February at the Samsung camp. So hold on until then.