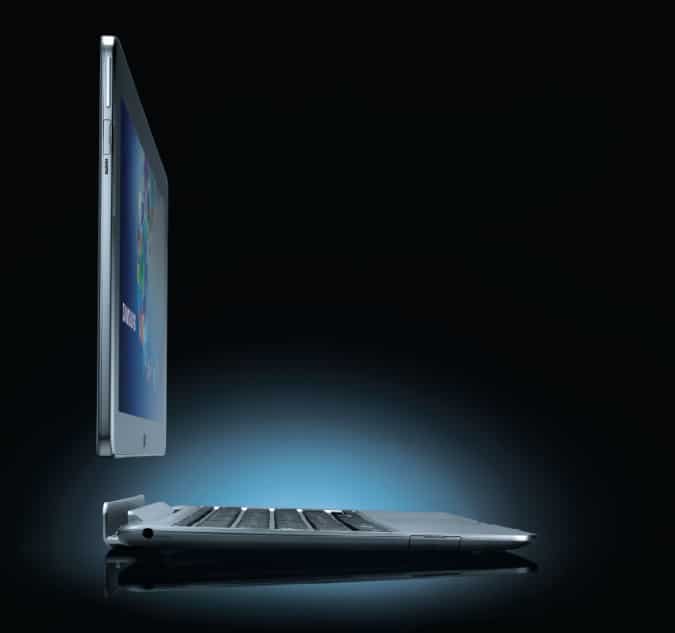 Tablet devices that dock into a keyboard seems to be the future. Lenovo started it all with its IdeaPad U1 Hybrid Tablet which never entered markets. Asus took the concept further with its popular Transformer range while Acer has also announced a hybrid tablet named the W510 based on the same concept. Now Samsung too has made it to that club with the launch of its Series 5 hybrid tablet at the Computex event now underway in Taiwan. Also, one of the unique aspects of the Series 5 Hybrid device is that it uses a magnetic locking arrangement for the tablet to be docked in with the keypad unit. This is unlike other tablet devices of its type that uses a mechanical hinge which in turn also add to the weight of the device.

This apart, Samsung’s hybrid tablet range comprises of two versions — Series 5 and Series 7, both of which come with 11.6 inch capacitive touchscreens having a resolution of 1920 x 1080 pixels. The Series 5 Hybrid, codenamed “William” is based on the relatively lesser capable Intel Atom processor. The Series 7 Hybrid which is codenamed Jones is better off with a Intel Core i5 processor.

Other features of the tablet include a microSD card slot, along with HDMI and USB ports. For models that would have mobile broadband feature in them there would be a SIM card slot as well. The tablets weigh about 1.5 pounds with a thickness of just 0.35 inches. A front 2 and rear 8 megapixel camera is also common for both the Series 5 and 7 tablets. Further, both the tablets support stylus pen input with a neat stylus slot built along the side allow for safe storage of the stylus as well.

No word yet as to when the tablets will be ready for a market debut or what they would eventually cost.