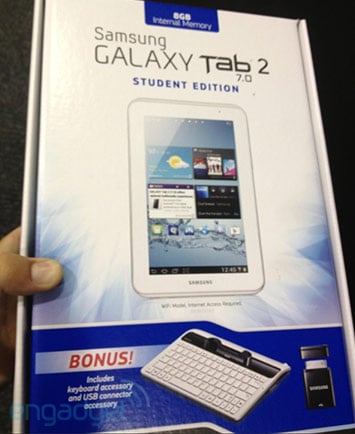 With Nexus 7 ruling the roost in the 7 inch tablet segment, what do other players in the segment do to make their products noticeable? Slashing prices has been the most favored and time tested method of increasing sales, though there is also the option of adding a few more accessories to the package while keeping the price the same. Samsung has opted for the latter with its Galaxy Tab 2 7.0 while re-christening it as a special Student Edition.

Everything with the Galaxy Tab 2 7.0 remains the same except for two enhancements; a full sized USB port that will allow for attaching external devices and a keyboard dock with a full QWERTY keyboard and Android function keys. The keyboard may not be the same as we have seen with the Transformer line of tablet PCs from Asus, though it is handy in its own way. So while the keypad for Galaxy Tab does not include a battery pack of its own, it is rigid as well and won’t allow the display to be closed as with a laptop. The keypad will still benefit those who need to type frequently, such as students.

Price has been kept at $249 with specs being the same as the standard version. Sure, with a 1 GHz TI OMAP4 dual core processor and a 1024 x 600 pixel display, it can match the Nexus 7 (which is a generation ahead with a 1.3Ghz Nvidia Tegra 3 quad core chip and a much more lively 1280 x 800 pixel display). However, the Galaxy Tab scores with front and rear cameras and a microSD card slot. The tablet will also have a 1 GB RAM with 8 GB of internal memory.

So those who are looking for a proper tablet without having to empty their wallets, the Galaxy Tab 2 7.0 Student Edition may just be it. Also, according to engadget, the tablet is slated to arrive at Best Buy from Aug 19.