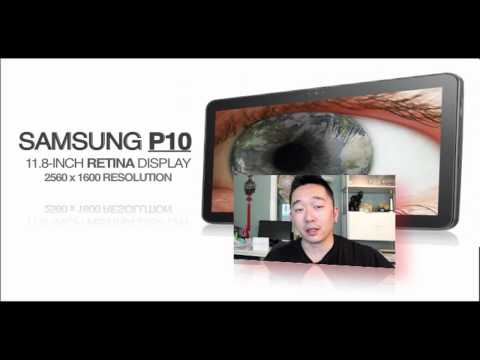 Apple may have picked up Samsung as its prime contestant for sharing the same ‘looks and feel’ of its iPad with the Galaxy Tab range of tablets among a hoarde of other out there though here is one Samsung tablet that can force Apple to think otherwise. The tablet codenamed P10 could be released sometime in 2012 and aims to take on what can be said the biggest USP that is propelling the iPad to dizzying heights of success — retina display. Samsung is looking to pack in no less than 2560 x 1600 pixels within a 11.8 inch frame which translates to a respectable 256 ppi in comparison to the 264 ppi that the current gen iPad boasts of right now. That is a few pixels less though the figure might just be of academic interest as the display would be just as vibrant and inviting to even the most discerning of users.

Of course Samsung won’t be banking just on a sparkling display to entice the tablet buying crowd as the P10 will also be endowed with a new processor technology that promises to take tablet performance to newer heights. The Exynos 5 dual ARM A15 32nm chipset is the latest that Samsung has come out with and includes twin cores rated at 1.7 Ghz. It is based on the same ARM Cortex A15 design that the latest Qualcomm Snapdragon S4 chip also shares its origin with. Interestingly, the latter has also gone on to power the Galaxy S III among a slew of other new generation devices. The chip is touted to offer better graphics munching abilities in spite of having just 2 cores while saving on battery resources.

Apart from the display and processing abilities, a tablet, in order to make the cut will also have to be packed with enough convenient features to appeal to the buyers. However, we can trust Samsung on this and the latest Galaxy S III is ample proof of this, which the company has rightfully described a ‘designed for human’.

However, with the Galaxy S III along with all other tablet offerings from the South Korean conglomerate having being based on Android, what remains a mystery right now is what the upcoming P10 will boot eventually. Even a few months prior to now, we could have safely predicted it to be Android and specifically Jelly Bean with the Nexus 7 being living proof of how user friendly the latest Android version is. Microsoft’s Windows 8 also stands a chance, more specifically Windows 8 RT that is designed for operation on ARM chip based tablet devices. Any which way it is, what is amply clear is that Samsung has to deliver on a thoroughly immersive user experience with the P10 no matter what OS it eventually is based on. The South Korean company has already shown it is on the right path with the Galaxy Note 10.1 and something similar will no doubt work wonders for the P10 device.

Among the other missing pieces of the P10 puzzle include its pricing and availability details though we hope to hit on those soon. In fact, there already are rumors of the tablet having made it to the FCC. Though the listing mentions the product as Samsung GT-8110, it could be a ploy to hide the real thing for a greater surprise later.