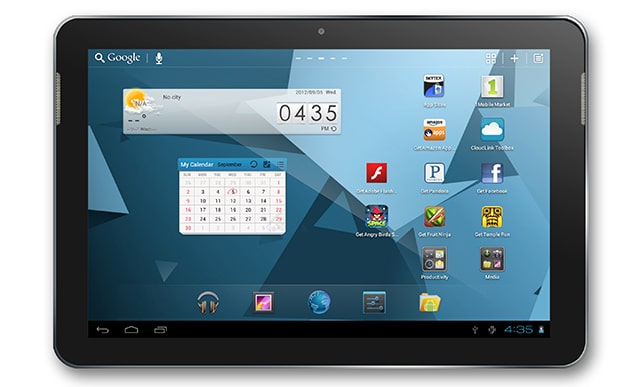 Today California based Skytex has announced two new Android tablets to be released in the next few weeks. The Skytex Imagine 10 and Imagine 9 are poised to take advantage of higher resolutions on larger screen devices. Each tablet features 16GB of internal storage, Bluetooth technology, and customizable Go Launcher UI.

The Skytex Imagine 10, a 10.1 inch widescreen Android tablet, boasts HD resolution of 1280×800. It is slated to cost around $299, while the IMAGINE 9 features a 9.7 inch 4×3 IPS wide view screen with 1024×768 resolution and will cost the same amount. Both tablets are to ship with Android 4.0 and will be upgradeable to Android 4.1, Jelly Bean soon after their initial release in October. Users will have access to the Skytex App Store with thousands of tablet optimized Android Apps plus 5GB of free cloud storage and other productivity apps, including Merchant Services and Office Suite through CloudLink’s Productivity Toolbox.

Underneath the hood on both devices will feature a 1.6 GHz Arm Cortex A9 processor paired with a Mali-400MP GPU and feature a mini HDMI output with support for 1080p. They house an extended 8000mAh battery for up to 15 hours of continuous web use. The lineup includes 802.11b/g/n Wi-Fi, mini-USB port, and MicroSD card slot (up to an additional 32GB of storage) for games, movies, music, photos, documents, and spreadsheets.

“Skytex has delivered on its promise to bring forth exciting technologies, content and services to consumers who have high expectations regardless of price,” said Sal Fiore, VP of Sales & Marketing at Skytex. “We worked diligently to bring significant value to our customers and this is the culmination of those efforts”.

I am very excited about the company’s new line of tablets. We have reviewed its devices extensively in the past and are quite happy with the build quality. The company has licensed our own white labeled version of the Good e-Reader Android App Store to ensure that you have access to over 6,000 quality games and apps. It has the Good e-Reader App Store bundled with the 1Mobile Market to give you two giant markets.