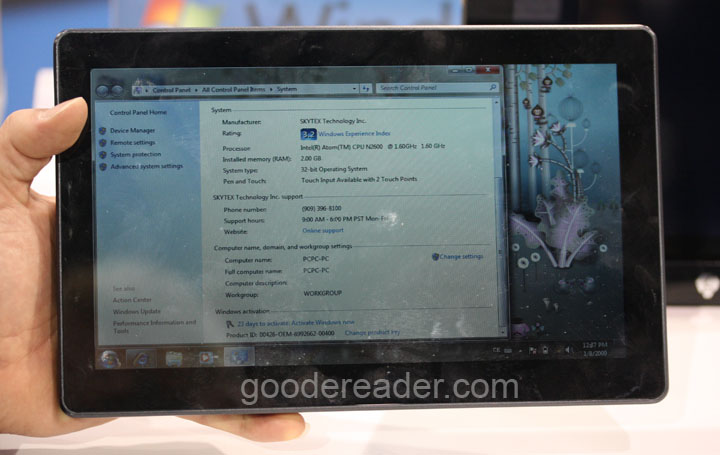 Skytex brought a brand new Tablet to CES this year with the new X-Series Windows 7 Tablet PC! This tablet is really the highest powered device has ever brought to the table and should be a viable buy when it is officially released in the next few months.

The Skytex X-Series is a 10.1 inch tablet that features 5-point capacitive multi-touch and a resolution of 1280×800. Really the large screen a high resolution really makes this unit shine and should give you very high quality graphics for your gaming and applications. Underneath the hood is a dual core Intel Atom N2600 running at 1.6 GHZ and 2 GB of DDR3 RAM. Your entire experience should be accelerated with the 60 GB SSD and I am a huge fan of tablets that are bolstered with Solid State Drives. It really makes a huge difference not only during the bootup sequence but making everything load faster.

This tablet sports varied internet connectivity via the built in WIFI with support for B/G/N and optional 3G dongle adapter. You can pair it with a bluetooth keyboard or mouse with 2.0 support or connect up peripherals via the two USB 3.0 ports. Finally you can video chat with the front facing 1.3 MP camera or take pictures with the rear facing 5 MP one.

Skytex had two different models at CES this year running two different operating systems. First of all, they had the Windows 7 model that will be ready to be shipped in a few months. They also had a developer preview copy of Windows 8 which really made this model a step in the right direction. If you have never seen a Windows 8 tablet in action there are two different experiences with the Metro UI. First of all, you get the very touchscreen friendly interface you might see in many of the Mango Phones that have hit the scene. It reminds me of the whole Android experience the way you can scroll between many screens of applications but with Windows 8 you see live previews of exactly what those apps are showing. If you are not a fan of the whole Metro interface you can switch to the standard Windows experience you are used to on your Windows 7 PC.

Talking to various reps from the company they are visibly excited about the entire Windows 7/8 experience and I am inclined to agree. I use Windows on a day to day basis and am used to my standard apps. If i need a good FTP, SSH or even Microsoft Office it is easy to download it. If you look at 80% of all tablets hitting they market they are running Android, which continues to be a very fragmented operating system. Twice a year Google always promises an OS update that will finally harmonize the ecosystem and normally leaves people asking for more. If I need to be productive level, I will always pick a good hardware running Windows and with the latest generation dropping before Summer if you buy this X-Series tablet now, you can update it with no problems.