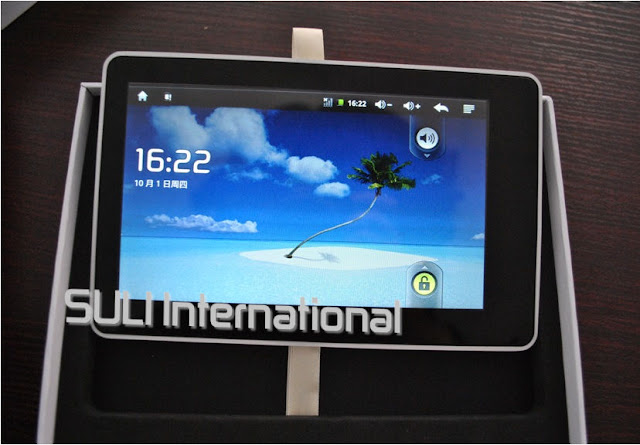 The Hong Kong based company Suli International has joined the budget Android tablet race with the Suli SL-7 device. Likely to be priced at around the $249 mark at the retailers, the tablet quite expectedly does not break any new grounds with either its performance or features and is one more to allure those who are on the look out for a cheaper tablet alternative.

Running Android 2.1, the Suli SL-7 comes with a 800 x 480 pixel Glass type 7 inch Capacitive touch screen that is sensitive to multiple touch. The tablet is based on a 600MHz Rockchip RK2818 processor which is a step up from the Rockchip RK2808 that had impressed many with its performance some time ago. Meanwhile, the current Rockchip RK2818 CPU, which in itself is a combination of an ARM9 600mhz processor and a 550mhz new high performance DSP does a pretty nice job. Coupled to a 256 MB DDR2 RAM, the tablet is capable of playing back 720 p videos effortlessly.

The tablet is compatible with a host of music, video, image and e-book file formats and is claimed to have a playback time of about 6 hours, thanks to the 4000mAH rechargeable Lithium battery that it packs in. On board storage options that the tablet will have on offer include 8 and 8 GB of Flash storage which can be enhanced further to 16 GB by the use of external cards.