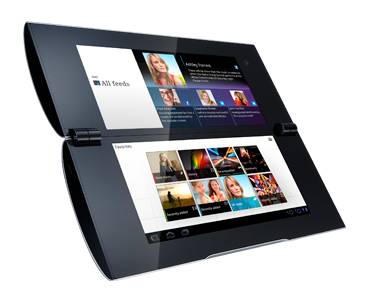 Sony’s take on the tablet segment comprises of two tablet devices, the Sony Tablet S and Tablet P. While the Tablet S has already gone on sale and has made its presence felt with its unique wedge shaped design, it’s now the unconventional Tablet P’s turn to do the same.

One feature that makes the Sony Tablet P different from any other in the market today is its double screen foldable feature. Each of the displays comprises of a 5.5 inch 1024 x 480 pixel screen. Also, each display is capable of running apps independently or in unison with each other. The design also makes the tablet small enough to fit in your pocket, which makes it really handy. Also, it’s not the first time we have come across dual screened tablet PCs, though none have survived long enough to be deemed successful. This makes it interesting to see how things turn out for the Sony Tablet P.

The device is priced at £499.99 and available at Dixons in UK. Converted into USD, that works out to be about $782, which is costly by any measure. It is however expected that the price will be lower when it comes up for sale in the US.

Other hardware features of the tablet include a dual camera with the front facing being a VGA and the rear being of 5 megapixel resolution. It runs on a 1 GHz NVIDIA Tegra 2 dual core processor and has 4 GB of storage.

One other feature that is of interest with the Tablet P from Sony is that it comes with PlayStation Certification. What this translates to is that you would be able to play some of the classic games that are available for the PS consoles.