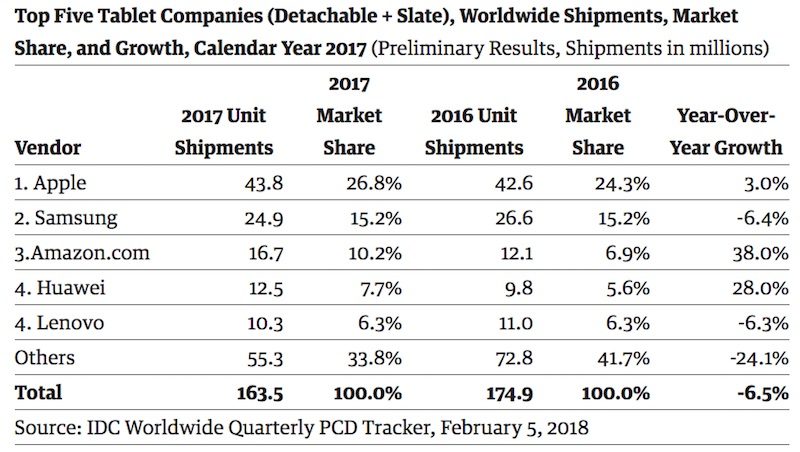 The Apple iPad sold more units worldwide than Samsung and Amazon combined . According to new data from the IDC Apple captured a 26.8% share of the tablet market in 2017, meaning that roughly one in every four tablets sold last year was an iPad.

Last week, Apple reported revenue of $5.8 billion from iPad sales in the fourth quarter of 2017, representing growth of six percent compared to the year-ago quarter. Apple’s average selling price of an iPad was $445, up slightly from $423 in year-ago quarter, suggesting more higher-priced iPad Pro sales.

In all of 2017 Apple sold 43.8 million tablets and Samsung sold 24.9 million. What is surprising that Amazon sold 16.7 million Fire tablets and their market share increased by over 38%. This is primarily attributed to the entry level Fire 7 HD that retails for $49 and the Fire HD which is around $89.

The top 3 vendors have carved out themselves a very interesting niche. The Apple iPad is the most expensive tablet, targeting people with money to burn, while the Amazon Fire are cheap as hell and Samsung is somewhere in the middle.