You are here: Home / Tablet PC News / The Dell Streak to make its debut in UK early June 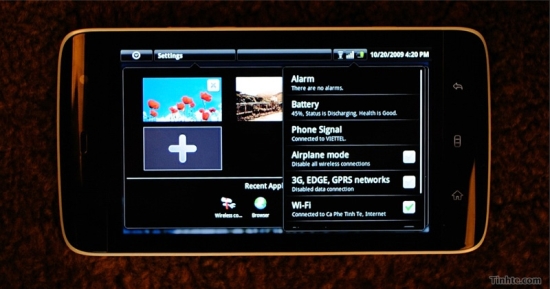 So its finally official now, the Dell Streak will be there for the taking from June onwards in the UK with next in line will be a pan European launch sometime later. This will be followed by the US where consumers will have to wait till summer, which is when Dell said the Streak will make its American debut. Previously named as the Mini 5 mainly on account of its 5 inch screen, the Android powered tablet will be available exclusively through O2 stores early next month and will be among the very few Android powered tablets that will have access to the Android Market right from day one, which means its users will be able to take advantage of all the apps currently available.

The Streak will be initially featuring the Android 1.6 but will be able to upgrade to the recently revealed Android 2.2 Froyo with Flash 10.1 later this year. The rest of the Dell Streak specifications are pretty impressive too. Like within its miniscule dimensions, there will be a Qualcomm Snapdragon processor clocking at 1GHz, which also powers the Google’s Nexus One along with a clutch of other smartphones. Display is in the form of a 5 inch, capacitive multiotuch screen having a 800 x 480 pixel resolution. 2GB of storage comes standard which can be stretched further to 32GB by way of the a micro SDHC card slot. A 1300mAh batterypack will be providing juice to the device.

Then there’s a 5 mega pixel autofocusing camera with LED flash as well as a video camera, both front facing. However, the Streak won’t have video chat facility as of now. The out of the box connectivity options with the Dell Streak can put to shame even the Apple iPad as there will be support for WiFi 802.11b/g, Bleutooth 2.1, HSDPA, HSUPA, UMTS, and EDGE right from the beginning. The device also has GPRS capabilities for use with Google Maps Navigation.

An interesting aspect of the Streak is its ability to double up as a smartphone, one that you can actually carry around with you with ease.  In fact, Dell takes pride in describing it as a tablet with voice capabilities and it does have the potential to replace the day-to-day smartphones that you have been using. Dell isn’t forthcoming with the battery life estimates of the Streak though its likely to sail through the entire day on a single full charge.

The coming of the Streak 5 will also be a high profile launch among the plethora of of MIDs that is getting to see the light of day. And its one device that’s got the looks, the features and performance all of which can propel the device right to the top of the MID heap. With the Streak, Dell also has managed to take the first step ahead against its traditional rival, the Asus and HP in introducing a tablet device. Both have been dilly dallying in coming up with a Tablet PC with Acer denying consistently whether it has a Tablet up its sleeve while HP does not seem to be able to make up its mind between the WebOS or Windows7 that its forthcoming Slate will be running.

Keep watching this space for more updates as well as the newest e-reader news.