You are here: Home / Tablet PC News / The Vega Tablet from ICD 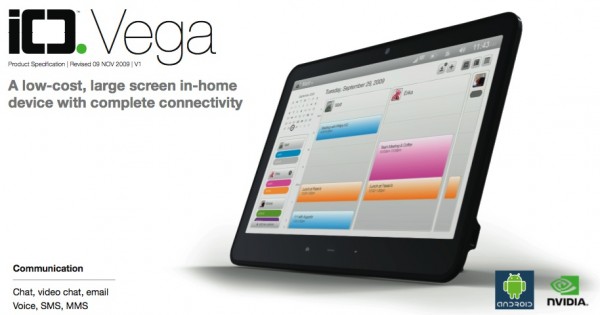 There is a low cost tablet PC from Innovative Converged Devices and its named the ICD Vega. A low cost tablet it might be conceptualized as but it comes packed with some rich features.

First off, there is a huge high resolution 15.6 inch touch screen of 1366 x 768 pixels that acts as your standard interface with the Tablet. This when most tablet manufacturers tend to loose their breath by the time they reach the 10 inch or so mark for their tablet devices. Powering the Vega will be the NVIDIA Tegra 2 Processor and will be running Google’s Android operating system, version 2.0. A 512 MB Flash memory does storage duty and if you are beginning to complain its just not enough, there’s a SD card slot that will expand your storage options further. The Vega comes equipped with a 512 MB RAM.

Other features that the Vega comes loaded with include a built in 1.3 MP webcam, an integrated microphone, a light sensor s well as an accelerometer that toggles the screen orientation from landscape to portrait mode on its own. Vega is generous as far as connectivity options are concerned and incorporates both Wi-Fi and Bluetooth while also being 3G compliant.

Interestingly, the Vega has been envisaged to be used in the kitchen where it will give members of a family access to the family calendar. This way family members will also be able to access from a central location in the home. Apart from this, the Vega can also be used to connect to the Internet after inserting a SIM card. So, the Vega can be used to browse the net as well. Battery life for the Vega isn’t that bad either as it takes just 2 hours to attain full charge that is enough to power the device for 4 hours.

Keep watching for more from the tablet segment or for the latest e-reader news.

Also, don’t forget to pick up your copy of the latest edition of the Good E-Reader Magazine. Its due to be out soon and promises to be just as exciting.