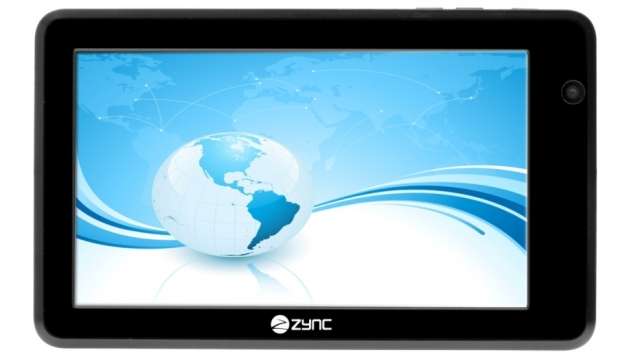 Tablet enthusiasts in India will get Google’s Android ICS with the Zync Z-990 tablet device. The tablet comes with a 7 inch capacitive touchscreen display with a resolution of 800 x 480 pixels. That might a bit on the lower side, though the tablet does boast of a 1.2 GHz processor at its core that operates along with a 1 GB RAM. The Zync Z-990 comes with just 4 GB of on-board storage, but is expandable to up to 32 GB. The tablet is both Wi-Fi and 3G capable, and includes an USB port as well as an HDMI out slot. The tablet draws is juice from a 3600 mAh Li-ion battery, though actual run times aren’t available just yet. The tablet is accompanied with a 1 year warranty which includes a pickup and drop as well. Lastly, saving the best for the last, the Zync Z-990 is quite friendly at just INR. 8,990, which makes it a good bargain for budget tablet seekers running Android ICS.

Also, interestingly, Zync belongs to the the Apple Group of Companies, though of course not the same Apple Inc. whose iPad 3 is making waves round the world. Meanwhile, company Chairman Ashish Garg had this to say during the launch: “The Zync Z-990 tablet is India’s first Android 4.0 tablet with features such as control over data usage, new gallery app with photo editor, new lock action, new user interface, new camera capabilities, and five point touch. We have also designed a keyboard especially for this tablet and priced it just as nominally. We developed Zync Z-990 based on the great consumer response to our earlier tablets Z-900, Z-909 and Z-999. In the growing era of mobile computing, this portable and innovative product will provide an unmatched mobile experience.”