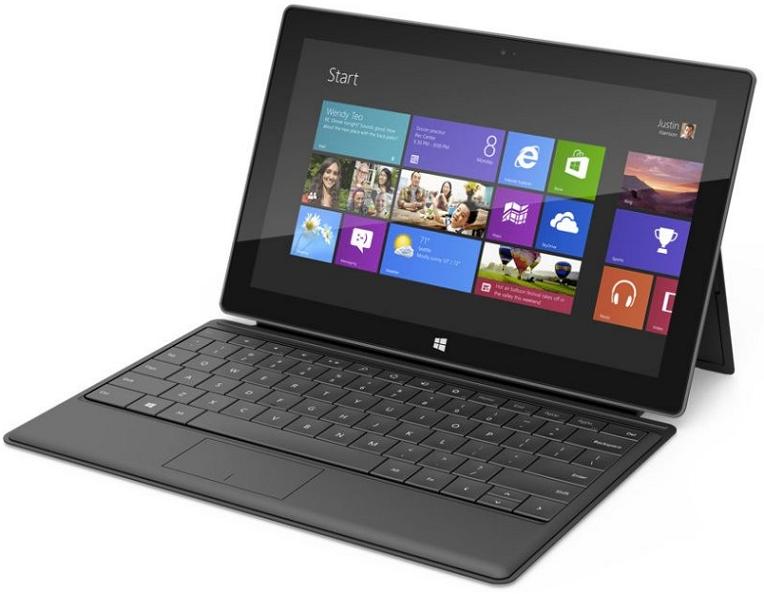 This can be considered the biggest news of the day, though it evoked the least enthusiasm. The 64 GB version of Surface Pro with an Intel inside and running the full blown Windows 8 version is $899. The top of the line model carries 128 GB of internal memory and comes for $100 more at $999. The Surface touch and type keypad cover will cost another $120. Both the Surface versions include Microsoft’s proprietary stylus, the Surface Pen based on Palm Block technology, and will reach stores January 2013.

Also, if the high price tag alone is not enough, there are reports from official Microsoft sources of the Surface Pro having half the battery life as the Surface RT. This gives it only four hours of stamina for the Pro in spite of it being endowed with a larger battery pack. The Surface Pro comes with a 42.5Wh battery against the RT’s 31.5Wh, but is having to support a hungrier processor and more pixels.

The Surface Pro shares the same appearance as its RT cousin, though the hardware is very different. An Intel Core i5 processor with integrated graphics brings everything to life for the Pro. The 10.6 inch display is lit up by 1,920 x 1,080 pixels, which is quite a few pixels more than what the Surface RT has. The Surface Pro also comes with a a full size USB 3.0 port, as well as a Mini DisplayPort that is capable of outputting to an external display of up to 2560 x 1440 pixels.

What remains to be seen is whether the Surface Pro manages to evoke mass appeal with its heavy price. Clearly, Microsoft is targeting the notebook/ultrabook segment with the Surface Pro and not the tablet segment alone. The Surface Pro can best be seen as a replacement for traditional computing models. Maybe Microsoft, or any of its hardware partners, will think it over and develop a device that can fit in the entry level tablet segment. Until that happens, the Surface Pro will only be a niche product.

Microsoft is reported to have halved its orders for the Surface RT citing weak demand, claimed Digitimes sources. The Surface RT opened to a huge demand and the device was impressive with its build quality and the huge potential. However, with an app store that is yet to mature and the fact that the tablet lacks compatibility with proprietary windows apps, the Surface RT didn’t stand much of a chance. The device is also not competitively priced, making it unpopular against the host of recent tablets, such as the iPad Mini, iPad 4, or the Nexus 10. Sources with Digitimes claim Microsoft has revised its sales target for the Surface RT to 2 million units by end 2012, down from the 4 million it had estimated earlier.

Microsoft hasn’t commented on this as yet.

Lenovo tablet makes it to FCC

A mysterious tablet device from Lenovo has been spotted at the FCC site, which has raised a few eyebrows. FCC documents are notorious for revealing a lot about the devices it processes and the only fact that has emerged about the Lenovo device is that it is 802.11n Wi-Fi capable. A few USB ports were seen, and it seems to be Windows 8 based.

Asus may have pioneered the concept of detachable kayboard with a battery of its own, though the concept was quickly replicated by a host of other manufacturers in their own hardware. None has been as cheap as $200, however, which is what a Chinese company Aocos is asking for its PX102 tablet.

Packing in a 1.6 GHz Rockchip  RK3066 ARM Cortex-A9 processor and Mali-400 graphics, the tablet comes with 1 GB of RAM and 16 GB of internal storage. Also, contrary to what its price might suggest, the PX102 is actually a 10.1 inch tablet with a 1280 x 800 pixel IPS display. The tablet is just 0.4 inches thick and runs Android 4.1. The PX102 is also wi-fi and Bluetooth capable and has a HDMI slot. Of course there is the tablet cover that also acts as a keyboard, though it’s not clear if the battery management calls for powering up the entire device as a whole or the tablet and keypad portion separately. Both the tablet and keyboard have separate battery units installed.