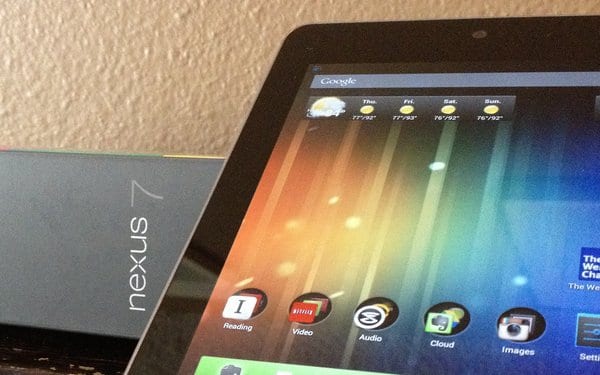 If rumors of a higher capacity Nexus 7 weren’t enough, we now have the 3G capable version joining the list. This device has already made it to the FCC and is slated for certification on Oct 29. The FCC filing revealed the tablet is listed as ME370TG, which in turn is strikingly similar to ME370T that refers to the Nexus 7, except the ‘G’ is believed to stand for its 3G capability.

Meanwhile, the 32 GB Nexus 7 is already reported to have gone on sale at Office Depot for $249. Staples is another retailer that was in the news for having started selling the device without waiting for it to be formally launched.

In another interesting development, a study of tablet usage by Chitika Insights revealed the Nexus 7 to have recorded the highest jump of 135 percent since it was launched in July. Chitika studied the tens and millions of ad impressions from the Chitika ad network to come to the conclusion that the Nexus 7 recorded 0.85 impressions per 100 iPad views. The Galaxy Tablet 10.1, Barnes & Noble Nook, and Galaxy Tablet 7 (with impressions of 1.35, 1, and 0.95 for every 100 iPad views) are above the Google tablet.

Rumors of there being a 10 inch variant of Nexus tablet also lined up for a release on Oct 29 just gained a stronger footing with the tablet’s manual having been leaked into the online sphere. The manual, which appeared in a Korean language site, does look to be genuine and provides us with a sneak peek of what the device is like. With more rounded edges, the tablet bears little resemblance to the current crop of Nexus 7 devices, though there seems to be no mention of the most talked about feature, a range topping 2560 x 1600 pixel display. Though what the images do reveal are the ports the tablet will offer, which includes a micro USB port, micro HDMI port, charging port, and a headphone jack. The tablet will also feature front and rear facing cameras.

The “Playground is Open” event is going to be staged on Oct 29, which will establish all the facts that we are so keen to know. Until then, to further add fuel to the raging rumor fire, Google senior VP of engineering Vic Gundotra has posted some cool images that the company claims have been taken with a Nexus 10 device. That’s quite unusual, as it shows Google insiders are the least concerned with keeping the unannounced device under wraps until it is officially revealed.


As has already been announced, both the iPad 4 and iPad Mini started off with the pre-order process, and while the iPad 4 seems to have survived the demand, the same can’t be said of its smaller cousin. What seems to have piqued the interest of the buyers even more is the entire stock of the white version of the mini iPad (including all of the internal storage options) vanished in just minutes. The Wi-Fi versions of both the iPad 4 and iPad Mini ship November 2 (the white and silver iPad Mini has been pushed back by 2 weeks), while the cellular versions of both the iPads will ship mid November.

The Nook HD is another of the new gen tablets that is slated for launch in the budget 7 inch segment, where the starting price seems to have been fixed at $199. Pre-orders of the tablet with a 7 inch 1440 x 900 display are currently being accepted, while shipping starts from Nov 6th.