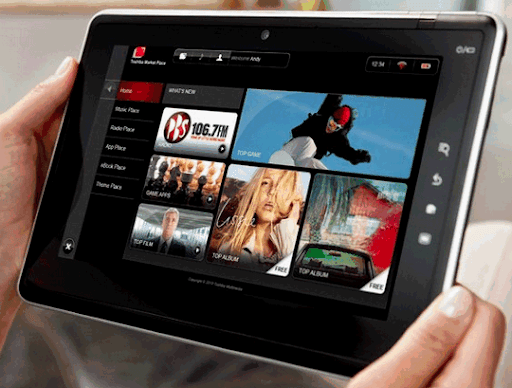 Toshiba has come up with an array of videos that aims to highlight the various features of their next offering in the tablet segment – the Folio 100 tablet PC. And the timing couldn’t have been better what with rival companies upping the ante in the tablet scenario, which makes it the right time to offer a video insight of the Folio 100 and its various virtues.

The Folio 100 will also perhaps be the first serious tablet effort in the 10 inch segment running the Android operating system. The Samsung Galaxy Tab too runs the Android, but what makes the Folio 100 special is that its in the bigger 10 inch category, which pitches it slam bang in the hot iPad segment. However, the Folio 100 shares a similarity with the Galaxy Tab in that both the tablet devices run the latest Android 2.2 Froyo version of the popular Google operating system.

But then, there is also no denying the fact that the Folio 100 is without an important lifeline. The Android Market will be out of bounds though Toshiba has made genuine effort to make that up by introducing its own apps. In fact there is in place the Toshiba Market that, as per Toshiba, can be an alternative to the famed Android MarketPlace.

The rest of the tablet specs too are impressive to say. Like its got 10.1 inch of capacitive touchscreen up front with a display resolution of 1024 x 600 pixels while on the other side of it lies a dual-core NVIDIA Tegra 2 chipset. The tablet supports both Bluetooth and Wi-Fi and is also compliant with the all important Adobe Flash 10.1, something that you need to have if you wish to enjoy a complete and unrestricted web experience.

The Folio 100 will also include the Opera web browser which will be in addition to the Android browser that comes by default. These apart, the tablet includes Fring as well that will make it possible for making voice and video calls.

Refers to the videos for a more in-dept look at the Folio 100.