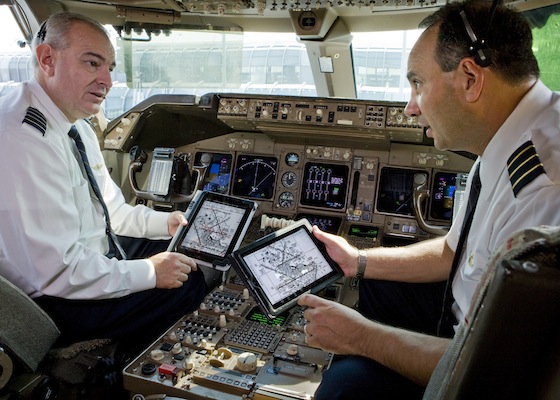 United Airlines has earned the unique distinction of being the first airlines in the world to have dropped the use of paper in its flight deck completely. Instead, the Apple iPad has been introduced into the flight deck and would contain all the maps charts or any other form of document that the 11,000 pilots of the Airlines would be using for their flying purpose. The Jespersen maps also would be carried on the iPad making it the most mobile maps and called the Jeppesen Mobile FliteDeck.

Converted into savings accrued by the Airlines with the iPad transformation process it would be first in terms of going green with a saving of 1,900 trees worth of paper over a space of time. The flight bag too will be lighter by 38 pounds as there will be no need of the operating manuals, charts and logbooks that were an integral part of every flight. This would lead to a saving of 326,000 gallons of fuel per year which in turn will lead to greenhouse gas emissions lessened by 3,208 metric tons a year.

However, United Airlines is not the first off the block to go for a paperless flight cabin. Alaska Airlines too had started a similar project though FAA regulation had come in the way. Among the other airlines that are currently weighing the options of adopting a consumer tablet for flight deck operations include Delta and British Airways.

Apple with its iPad has been able to hold the top position when it comes to the use of tablets in the air. The only other tablet that too has managed to register a presence in the skies is the Galaxy Tab 10.1 that are being used by American Airlines though the Samsung tablets are restricted in the passenger section only. Both the passengers and the pilots as of now consider the iPad to be the best choice given wide range of choice availability at the Apple app store.

Let’s hope the iPads work flawlessly even in the most critical of situations while there are enough redundancies built into the entire system to ensure everything works just as it should even in the most demanding situation.