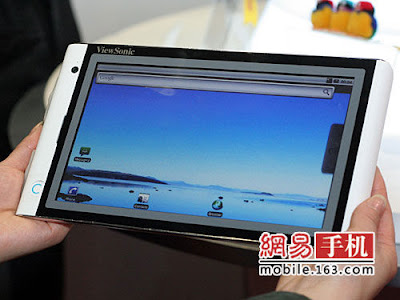 The flow of Android tablets continues thick and fast and here is one more. Viewsonic, which has considerable expertise in display technology and has come up with a few good e-readers as well is reported to be working on a device with a 7 inch screen. A good thing with the upcoming tablet is that it will have the latest Android 2.2 Froyo version of the operating system right out of the box.

This apart, among the other things of the upcoming tablet that has come out in the open is that there is going to be an integrated webcam with a resolution likely to be either 3 or 5 mega pixel. An interesting aspect of the new tablet is that it will feature GSM connectivity for phone functionality with chances of 3G access being included as well. This will pitch the tablet in the same category as the Dell Streak and the Huawei S7.

So it’s like a huge smartphone, perhaps a little too big to make for comfortably holding on to one’s ears to avail of the tablet’s phone credentials. And that’s the reason why the tablet should have or perhaps will have Bluetooth feature for connecting a headset. A mic or a headset jack is the bare minimum requirement.

Viewsonic will surely like to cash in on the holiday season which is when it plans to launch the tablet in the UK and Europe though there is no word yet as to when its going to set sail for the US shores. Prices for the European market is likely to be around the £300 to £400 mark, which translates to around US$478 to $637.

Viewsonic’s earlier attempt at an Android powered tablet is the VT101 tablet which was launched in China a few months ago. Its with a larger 8.9 inch screen having a resolution of 1024 x 800 pixels and has a 1GHz nVidia Tegra 250 CPU. If the upcoming tablet is a smaller version of the same tablet with a 7 inch screen then it would definitely be a nice tablet to watch out for. Add to that the access to the Android Market place that the tablet comes bundled with and what you get to have is perhaps a sure shot winner on your hand.

Picture shown above is that of the VT101 tablet.