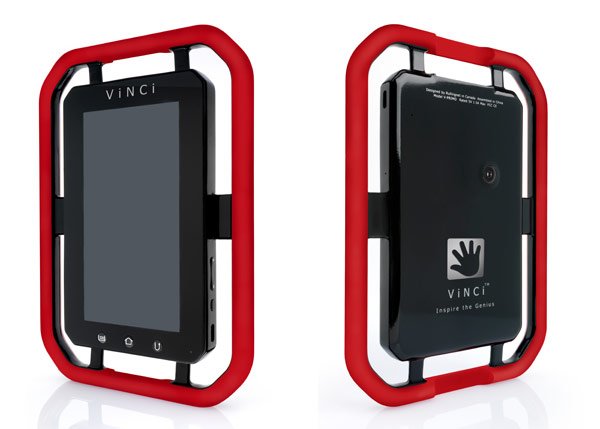 Vinci Tab II, as the name suggests, is the second iteration of the kid friendly tablet that we reviewed earlier. However, while the first gen device suffered from being priced too heavily, the second gen Vinci Tab II is much better off on that count, priced as it is at just $199 for the device sans Wi-Fi and $249 for the Wi-Fi enabled model. The Vinci Tab II also has one of the most distinguishing forms for a rugged toddler’s tablet, which includes a bull bar built along the entire length of the tablet to allow for extra rigidity.

The rest of the specs aren’t too awe inspiring, but enough to get the job done. A 1.2 GHz Cortex A8 processor forms the heart of the device with a 7 inch 800 x 480 pixel display on top of it. While the display may not be the most visually enchanting and a far cry from the now popular retina type displays, it will still be ok for kids as they aren’t the most discerning of consumers.

Internal memory amounts to 8 GB with a micro SD card slot to cater for more requirements. There is also a 3 megapixel camera built into the device, which should be enough to hone the photographic skill of the young minds. The tablet runs Android, though the manufacturer isn’t revealing the specific version (which may mean that it’s not the latest Android ICS).

The Vinci Tab II comes with three levels of premium educational apps which are inclusive of a few interactive storybooks and animated music videos for the kids to get started with the tablet right away. Of course, there will be no dearth of content and apps to keep the kids engaged with the tablet, with the kids section of the Good E-Reader App Store also offering a host of interesting apps to be downloaded on the device.

The Vinci tab II can be sourced from several big name retailers such as ToysRUS.com, Diapers.com, and YoYo.com, along with Amazon and SkyMall.