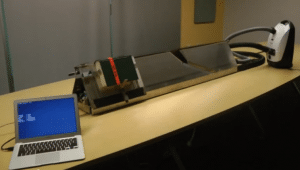 Google wants more and more people to scan and digitize books. According to Hack A Day, Google has released plans for a do-it-yourself book scanner. It uses two image sensors taken from a desktop scanner, has a sheet metal body, and uses a vacuum cleaner to automatically turn pages. According to the article, it will cost about $15,00 to construct.

Google has the plans up on a Google Code page, and above is a Google video of a Google TechTalk explaining the process.