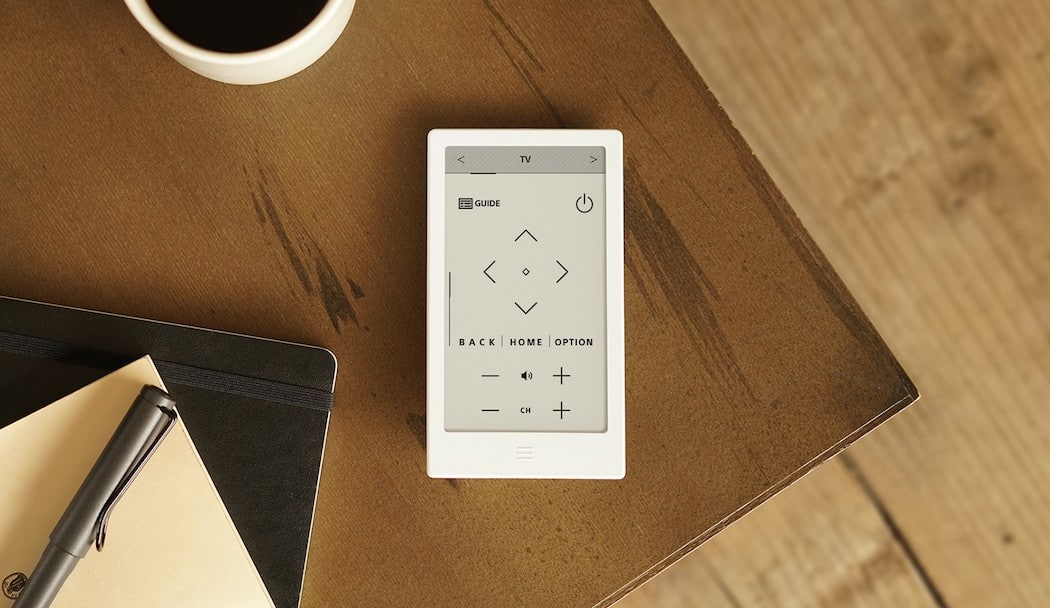 Sony developed a smart remote control in 2016, that used in E INK screen. It was initially crowd funded on the companies own First Flight platform, the same one the Sony FES watches first debuted.  The Huis Smart Controller is basically a universal remote, which can connect to your TVs and Blu-ray players to lights and air conditioners. You can customize the interface either on the remote itself or by using a PC app for greater control, and you can share and download configurations online. Sony says it decided on an e-paper display rather than an LCD screen or smartphone app because the technology’s lower power consumption and ability to display the virtual buttons all the time makes it more natural to use as a remote.

The remote can go to sleep to conserve power, when you are not using it. When it wakes, it immediately can be used to turn a television on and start flipping channels. It can last a couple of months before it needs to be recharged via the USB cable, either to your PC or wall charger. The product has only been available in Japan for the past 3 years, but it is now available on the Good e-Reader Store for $229 USD.

The Sony Huis remote control is pearl white and comes with a little dock. It can be used to pair via Bluetooth to power your Apple TV, Roku, television and even turn on your Playstation and XBOX and navigate around the UI. The retail packaging stands up in a vertical white box with the HUIS logo and the model number 100RC. The back of the box has a bunch of regularity information and bar codes, since it is sold in a retail environment in Japan. Inside the cardboard outer packaging is another cardboard box, which houses the remote control, in a static proof bag. There is a user manual, quick start guide and warranty information, but it is all in Japanese. If you really need to read this, you can simply use Google Lens. The Huis comes in two colors, black and white, our review unit was white. The Micro USB cord is also in white, and there is a wall charger also in the box, but it is black.

The Huis has a very odd shape, it is not a typical remote control. It is meant to stand on your coffee table and be easily gripped. It has a IR controller on the very top and a USB port on the bottom. There are holes in the feet, that can hooked up an optional Bluetooth Cradle, this is necessary if you want to connect via Bluetooth. The remote on its own has only an IR sensor.