You are here: Home / Technology / iPhone vs HTC EVO Battle 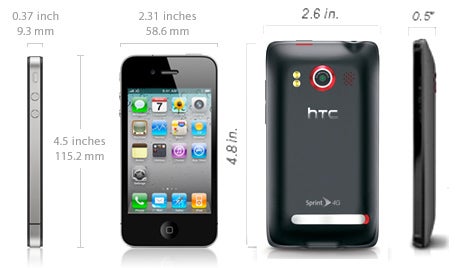 The new iPhone 4 from Apple is the company’s biggest update yet for the handset.

It is particularly marketed for video calling, and the use of various media such as books, movies, music, and games; and, of course, for web and e-mail access. It was announced on June 7, 2010 at the WWDC 2010 at the Moscone Center, San Francisco, and was released on June 24, 2010 in the United States and many other parts of the world such as United Kingdom, France, Germany and Japan.

The iPhone 4 retains its operating system from its previous models. Fingertips are still used as its primary control method. Something that we found people had some issues with was the fact how the iPhone restricts software that is not approved by Apple.

The new design is the main difference between the iPhone 4 and its predecessors. The internal components of the device are situated between two panels of chemically strengthened aluminosilicate glass.

It has an Apple A4 processor and 512 MB of eDRAM, twice the effectiveness of its predecessor and four times that of the original iPhone. It has 3.5 inches LED backlit LCD with an increased 960-by-640 pixel resolution. Many iPhone 4 buyers have reported signal reduction when the phone is held in certain ways, especially in the left hand, as the antenna problem is in the bottom left corner of the phone’s side casing. The company has offered customers a free case until September 30, 2010, or a refund within 30 days of purchase.

It sure seems like the iPhone 4 has it made…however, when the iPhone 4 hits retail shelves it will have to battle an onslaught of Android devices for consumer attention. The most significant is the HTC Evo.

The Evo has one big advantage that Apple can’t beat. It runs on Sprint’s 4G network, while the iPhone is stuck on AT&T’s 3G service. Sprint 4G, though, is not available in most major cities, including San Francisco and New York.

Because this is a comparison between a 3g phone and a 4g phone we should take this time to mention that the number “4”at the end of the iPhone does not mean that it’s already running on 4G network. AT&T can actually only offer 3G speed up to now.

Although the gap isn’t THAT huge between the 2 phones, our conclusion is that, if you are looking for a faster connection, be it 3g 4g or even wifi with the flip of a switch HTC evo would take the gold.