You are here: Home / Bookselling News / Americans are swapping bookstores 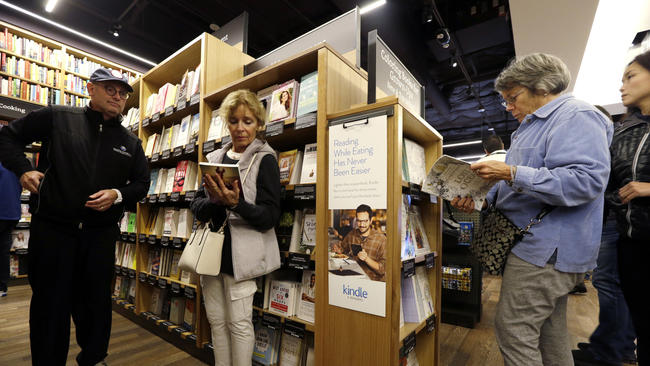 Barnes and Noble has proclaimed that by the end of the fiscal year, they will close eight stores in the United States. Amazon is filling the gap, the Seattle company has just recently opened up a new bookstore in Chicago and plans on opening a New York location in the coming months.

Amazon is the number one bookseller in the United States, they have a stranglehold on selling print online and their retail locations are starting to catch on in a big way. Last year the company opened up physical locations in San Diego, California and Portland, Oregon. This year, it has seven more locations slated to open, including one at Columbus Circle in New York City. At the Amazon Books stores, things are a little different from the model of its chain predecessors: On the shelves, covers face out instead of spines; prices are unlisted so they can fluctuate with online changes.

I think it is interesting for every B&N Bookstore closing, Amazon is opening one.

Dozens of malls have closed in the last 10 years, and many more are at risk of shutting down as retailers like Macy’s, JCPenney, and Sears — also known as anchor stores — shutter hundreds of stores to staunch the bleeding from falling sales. Americans are forgoing monolithic retail locations and instead are embracing smaller, boutique stores.

Maybe this is why Barnes and Noble is failing in the bookselling arena. Their average location is multistory and has a large footprint. Instead of books, they feature lifestyle items, greeting cards and stationery. You can sit down and enjoy $11 hummus at one of their concept stores or just sip on a glass of wine. One of the big complaints from former B&N managers is that they have no freedom to organize the store the want they want or to curate books on a local level.

Amazon bookstores are designed to be small and cozy. They only stock books that sell well online or have a high amount of ratings. Store managers have a huge amount of freedom to organize the store and to showcase titles by local authors or seasonal themes. The vast amount of floorspace is devoted towards books and there is a little section that showcases E-Readers, Fire Tablets and Alexa voice assistant speakers.

When Amazon opens a new bookstore, traditional media and online blogs pick up on the story right away. Whereas when B&N opens a new location, it barely is a blip on the radar. Maybe it is true and Americans are swapping bookstores, from B&N to Amazon.