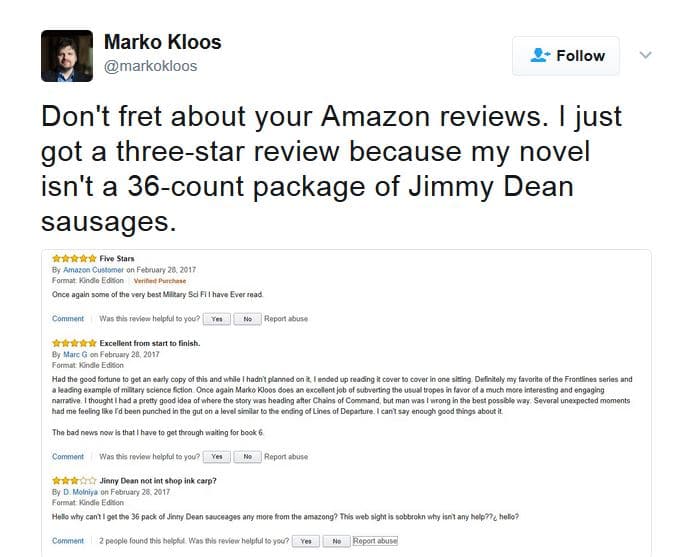 Over the years, a number of authors–both high profile and never-heard-ofs–have suffered under the joint efforts of internet trolls who come together to leave one-star reviews, often on books they’ve never bought, never read, and never heard of. Entire blogs have been created about author bullying and the just as guilty behavior of some authors who’ve attempted to take matters into their own hands.

It rarely goes well for anyone involved.

One player in the game continues to come out unscathed, though, and that’s Amazon. After all, even if you’re only there to leave some algorithmic hate on a book, you still came to their site, saw some items on the home page, and generated traffic if not sales.

Teleread has posted an in-depth piece on how one-star spite reviews continue to plague authors, and as usual, The Passive Voice had a ton of well-formed arguments in favor of the current review system, railing against it, and outright admitting that reviews as a concept are simply flawed.

The highlights reel includes some very valid points. First, just as there’s no such thing as bad publicity, one commenter pointed out that the volume of reviews is what gets your book in front of potential reading customers on Amazon, not the overall star rating. At the same time, others gave clear examples of instances in which reviewers openly stated that they had never even read the book, but their reviews didn’t violate Amazon’s TOS.

The age-old solution came up again, which is to only allow reviews of items actually purchased from Amazon. That solution didn’t sit well with everyone; first, it completely ignores the book bloggers who (either for fun or profit) read and review high numbers of titles, often before their release. Also, it tosses out any love for library patrons who happily review books that they checked out, as well as those readers who rely on used bookstores, discount bins, and other sources of lower cost reading material.

One interesting solution does rise out of the argument, and that’s the possibility of Amazon creating two separate review sections, one for consumer reviews and one for editorial reviews. It would be much like saying, “These are the everyday people who bought this book, and over there are the book industry people who have their own opinion.” It would still leave out library patrons and the like, as your only option would be to purchase the book from Amazon or register as a book blogger, ARC team member, or other connected reader.

Passive Guy had a highly interesting query for the commenters: why don’t authors who’ve suffered an onslaught of one-star reviews point it out in the book description on Amazon? As in openly stating, “My book has been targeted because of (insert ridiculous reason here), please read the reviews very carefully before deciding.” The general consensus seemed to be that this type of tactic would only open the floodgates to even more trolling, as past examples of Goodreads bullying have shown.