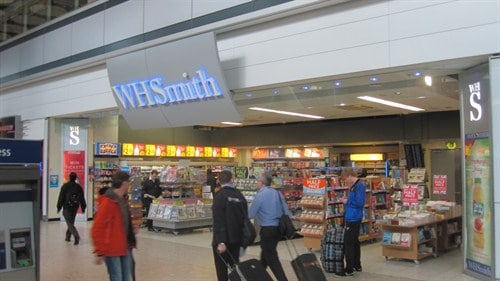 Barnes & Noble and Chapters/Indigo operate hundreds of bookstores all over Canada the United States. They tend to think big, large stores with multiple levels in order to provide enough books to keep people interested. The big box approach works for some people, but others want a smaller, more curated experience. Should these booksellers open a series of small boutique shops?

WH Smith is a fine example of a large bookstore chain who has the ability to think small. They opened a small prototype store in Heathrow Terminal 5 before Christmas; another recently opened in Edinburgh Airport. Surrounded by high-end luxury stores in Terminal 5, the company’s new shop features a “luxury book” section selling expensive coffee-table books, as well as a gift book section.

In order to draw attention to the stores, WH Smith reached out to dozens of authors who attended the grand opening and signed autographs for people who bought their books. They also played the role of brand ambassador by talking to fans and airport staff.

In the six weeks leading up the Christmas holiday, B&N and Indigo really hyped up their selection of autographed books. These were pre-signed by the authors and shipped to hundreds of bookstores and sold online. I think having a series of boutique shops would put more of an emphasis on big name titles the retailers wanted to hype. Additionally, having autographed books all in one place would likely result in more sales.

I find it amusing that almost all of the forward thinking and experimenting occurs in the United Kingdom, while Canada and the US lag behind the times. What ever happened to innovation and trying new things out? The big box approach is dated, and booksellers are having to turn to scented candles, dolls and cookware in order to make ends meet. Why not try opening a very small store, in a high density area or an airport?