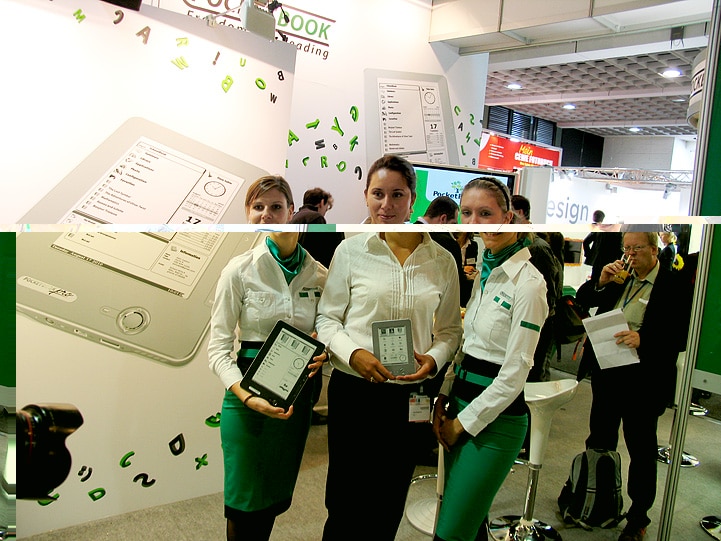 Pocketbook first burst on the scene in 2007, releasing a slew of e-readers and enjoying a presence from Kansas to Kiev. Pocketbook e-readers were hardly available in the retail sphere and were mainly relegated to being a purely online product.  In the last six months, the company has abandoned the USA market completely and has undergone a complete management shift in the Ukraine.

Pocketbook was the sort of company that many tech savvy users liked because the devices had support for over nine different ebook formats. The entire device line mainly comprised of six and nine inch readers. The company was originally dealing with OEM’s to provide the hardware, such as Taiwanese based Netronix, and then switched  to Foxconn in 2010.

The head of American distribution was based in New York, while the head office was located in Kansas. If you attended major tech shows like CES in 2009 and 2010, you might have seen Jerry there with a huge booth. He was the US spokesman of the company and if you wanted to buy anything from any of the American branded websites, you dealt with him. In early 2011 he ceased being the distributor, citing lack of demand and high prices. This made the line of Pocketbook readers unable to compete against the likes of Kobo, B&N, and Amazon. In 2012 Pocketbook shut down the Kansas based headquarters and had the intention of opening a NW Pacific branch, but it never panned out.

Pocketbook’s worldwide operations are based in Kiev in Ukraine. The company has always done well in the Eastern European market because the e-readers read almost every language in that part of the world. The lack of competition has always helped the company market the more pricey models, because hardly any major players targeted that market. The CEO of Pocketbook, Maksim Prudes, left the company in early 2012 and the new CEO Oleh Denysyuk started running the company.

Pocketbook is scaling back the development of new readers and its marketing efforts across the world. It tried to get into Android tablets to supplement its aging reader line, but most of its hardware was woefully under-performing. Support for existing users in the USA is basically a figment of the imagination, as there is zero presence for customer service. Repeated calls to Regina Sergiyenko, head of North American operations, by many vendors mostly go unanswered.

In the USA, Pocketbook’s failure does not stem from lack of trying. They tried to open a few popup stores and had another based in New York, run by Jerry. All locations were closed within about a year of operations. The CEO told us last year that the company was closing all its retail operations and moving to an exclusive online environment.

The company is at a crossroads and may abandon the entire line due to current economic climate. Many of the top players in the game sell their hardware at a near loss to make up in selling digital content. Pocketbook had the Bookland and Obreey stores, but neither saw any reasonable amount of books to buy or download for free. Simply put, Pocketbook cannot compete on a worldwide stage anymore because of the international expansion by Amazon and Kobo. The company had its time in the sun, before e-readers got really cheap, now it is irrelevant. I predict by late 2013 the company will go the way of iRex and Cool-ER.