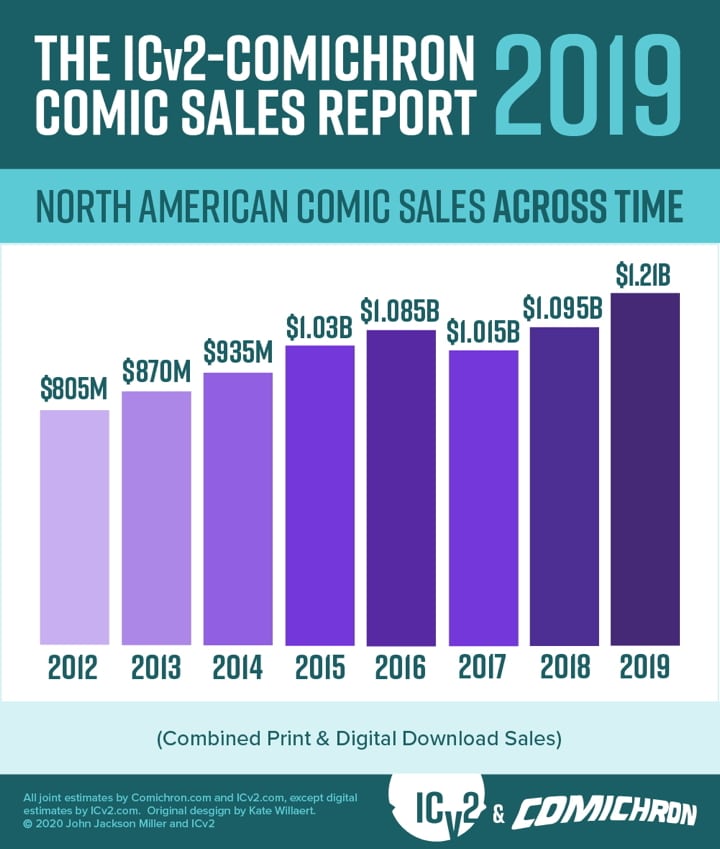 The total sales of graphic novels and comic books generated $1.21 billion in 2019, which was an 11% increase over last years figures. Let’s breakdown the exact amount that each format made in North America. The graphic novel format led the charge in overall revenue and made $765 million, while sales of periodical comics were $355 million. The sales of digital comics, that did not include online subscription services, totaled $90 million. Sales made through different retail channels totaled roughly $570 million via the bookstore channel; about $525 million in sales were via direct market comics shops; and about $25 million in sales came via “other channels,” which includes newsstands and crowdfunding.

So the summary of these sales figures basically states that graphic novels in the book channel, which includes chain bookstores, mass merchants, major online retailers, and Scholastic Book Fairs were once again driving the format. Digital sales were back to 2018 levels as the growth in catalogue titles across major platforms slowed. Sales of periodical comics in comic stores were up mid-single digits.

Comichron’s John Jackson Miller said “Print comics sales had never before topped $1 billion in current dollars, and one has to go back to the boom of the early 1990s to find sales at or above that level when adjusted for inflation,” Miller said of the new estimate.