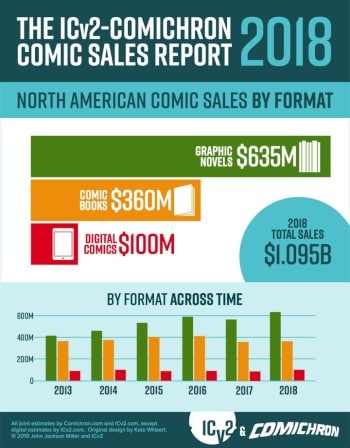 Digital comic books are easy to purchase, but they have not been accepted by Canadian and US readers. Only 9% of comic sales are sold through Amazon-owned comiXology and other distribution channels and only generated $100 million in 2019. 90% of physical comic books are sold in bookstores and comic book stores.

ICv2 has estimated the total value of the North American market is $1.095 billion in the US and Canada in 2018, up modestly from 2017’s $1.015 billion. Typically, increases in the overall market are driven by the comic industry’s two largest companies, Marvel, and DC, which both publish corporate-owned superhero comics almost exclusively and together account for about 80% of all comics sold through the direct market.

Although comic book stores make up the vast majority of superhero comic books, the titles are selling in bookstores, such as Indigo Books and Music and Barnes and Noble, are anything but. According to Bookscan kid-oriented comics and graphic novels account for a whopping 41% ;manga is 28%. Superhero content is less than 10%, down 9.6% year-over-year.