You are here: Home / Digital Comic News / Five Graphic Novels to Read on Your New Tablet or E-Reader 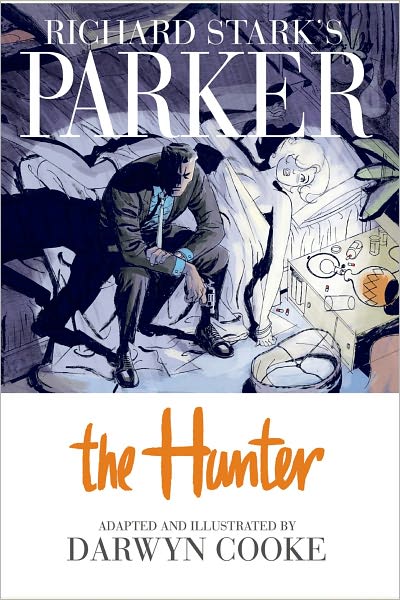 Congratulations on getting your new e-reader. Now, what should you read on it? Here are five suggestions for graphic novels that will look particularly good on your new device. Each one is complete in a single volume and makes for a good read whether or not you are usually a fan of comics. (If you’re new to digital comics, check out my quick guide below.)

Parker: The Hunter is Darwyn Cooke’s graphic-novel adaptation of the first of Richard Stark’s Parker novels. (Richard Stark is the pen name of mystery writer Donald Westlake.) It’s a taut tale of revenge, and Cooke’s illustrations strongly evoke the setting of the story, the early 1960s. Available via iBooks, Kindle, as a Nook book or a Nook app ($7.99)

Here one for food lovers: Oishinbo: A La Carte, an exploration of Japanese food presented as a journey by a reporter assigned to put together the greatest Japanese meal ever for his newspaper’s anniversary celebration. Of course, this requires him to travel around Japan sampling every possible delicacy. This manga reads right to left, which takes a little getting used to, but the art is clear and not very stylized, so it’s a pretty easy read. (Available via the Viz app ($4.99) or for the Nook ($5.99)

Ivy, by Sara Oleksyk, is a coming-of-age tale that is brutal in its honesty. Teenager Ivy dreams of escaping her small-town existence, and a long-distance relationship with a fascinating stranger helps keep her going. When he actually shows up, though, she has a tough time matching her fantasy to reality. Rarely has a creator captured the nuances of teenage life so well. This was my personal choice for top graphic novel of 2011. Available via comiXology ($9.99)

Mary Talbot tells two stories in parallel in Dotter of Her Father’s Eyes: Her own story of growing up as the daughter of a troubled James Joyce scholar, and the story of Joyce’s daughter, Lucia, who dreamed of being a dancer but wound up in a mental hospital. Talbot portrays the gender and family conflicts without ever being heavy-handed, and the art, by her husband Bryan Talbot, beautifully evokes the ambience of both Paris in the 1920s and England in the 1950s. Available via Dark Horse ($12.99).

Whatever Happened to the World of Tomrrow, by Brian Feis, is a look back at the future as viewed in the past. Starting at the 1939 World’s Fair and winding up with the end of the Apollo program in 1975, it follows a young boy and his father as they thrill to the possibilities that science and technology were opening up; a parallel story, written as an old-time adventure comic, brings in another dimension. The art is beautiful and very evocative of the period in which it takes place. Available via comiXology ($9.99), Kindle ($9.99), or Nook ($13.72).

Here’s a quick guide to graphic novels on e-readers.

Kindle: Most graphic novels will not work on a black and white Kindle; the resolution simply isn’t good enough. They will work on a Kindle Fire or the Kindle app for iPad or Android.

iBooks: iBooks is simply Apple’s digital bookstore; purchases are made through the iTunes store and can be read on any of your iOS devices.

ComiXology, Viz, Dark Horse: These are all comics storefronts; Viz and Dark Horse are publishers who carry only their own comics, while comiXology offers comics from a number of different publishers, including Marvel and DC. All three services sell comics via their websites and iOS and Android apps. You will need to create an account to buy comics; that account will allow you to sync comics across all your devices. Purchases made via the iOS apps go through the iTunes store, while you will have to enter a credit card number to purchase comics via the web.

While each of these channels will allow you to read your graphic novel on any device that has the appropriate app, they do not sync with each other—so, for instance, if you buy Oishinbo for the Nook you can’t read it using your Viz account.