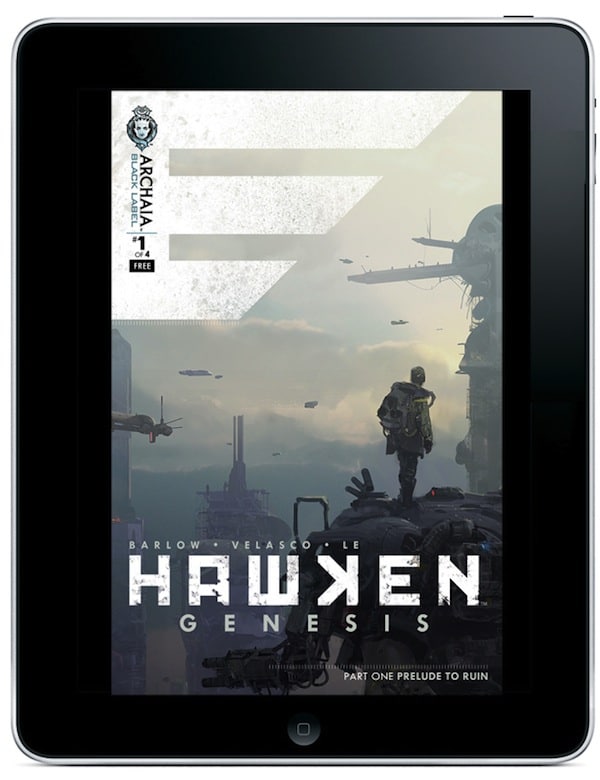 Games and comics have always had a lot in common, including overlapping fandoms, and the digital medium allows more crossovers than ever before. The latest iteration of this is Archaia Entertainment’s Hawken: Genesis, a four-part digital comic  preview to Meteor Entertainment’s Hawken free-to-play online game. The twist here is that the first issue includes a code that allows the reader to participate in Hawken’s third and final closed beta event, which runs from November 20 to December 6. The game is slated to be released on December 12.

Hawken is a multi-player first-person shooter game set in a future world controlled by multi-planetary corporations. In March 2013, Archaia will publish Hawken: Genesis, as a prequel to the game and a sourcebook for it, providing background on the world of the game and sketching out the relationship between the two main characters, Rion Lazlo and James Hawken. The four free digital comics are intros to the graphic novel, written by Jeremy Barlow (Mass Effect) and developed in collaboration with Hawken creative director Khang Le.

The first issue is fully painted in stunning detail, which looks great on the retina display of the iPad and almost as good on the smaller screen of the Nexus 7. Either way, it is a handsome comic. Hawken is a mech game, and the mechs in this comic have a real solidity to them. This first issue is narrated almost entirely with text boxes that describe the world of the game, so reading it is a bit like watching a movie trailer, and at eight pages, it’s just a nibble of what is to come.

Games and digital comics are a powerful combination for two reasons. First, they can complement one another in terms of storytelling. The publisher Dark Horse has created tie-in digital comics for BioWare’s Mass Effect and Dragon Age that flesh out the story of the game and bridge the gaps between different versions. The second is that digital comics live in the same ecosystem as many games. While few people know where the nearest brick-and-mortar comics shop is, everyone who plays games does so on a digital medium. The most spectacular example of this synergy may be Ape Entertainment’s Pocket God comic, which is available in the iTunes store, right next to Bolt Creative’s Pocket God game, on which it is based. The first issue alone of the Pocket God comic has been downloaded over 250,000 times, and almost all of those were paid downloads—there are no free Pocket God comics, except for special promotions.

The Pocket God comic has an edge over the others in that it is a standalone app in the iTunes store, so it’s easy for people to find by accident. Dark Horse has its own digital service, while Archaia’s comics are carried in comiXology’s Comics app. Still, the beta code should be inducement enough for Hawken fans to seek out the Hawken: Genesis comic.