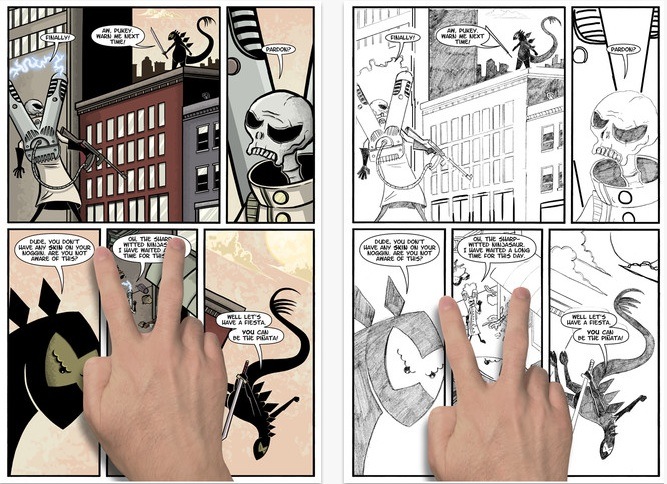 Jason Horn’s Ninjasaur is a standalone iOS app that includes a short comic about a ninja dinosaur and a little video game where you control the main character as he throws shuriken at his enemies. Both the comic and the game are very basic. There aren’t a lot of navigation tools—no table of contents, no way to interrupt the game. The comic has a clever time-travel twist, but the game is a simple shooting game. There’s something more, however, something you might start seeing in other apps: The comic includes a feature called Breakdown, which allows the reader to pass through the various stages of page creation with a two-finger swipe. As Horn says in the interview below, this is attracting some attention, and other creators may be interested in using it.

The Breakdown feature was just one of the interesting things about this app. Horn has been publishing Ninjasaur as a webcomic for five years and he had a successful Kickstarter earlier this year to fund a print collection, so why make it into an app? And why include a game in that app? I fired off some questions, and here’s what he had to say.

Good E-Reader: Earlier this year, you had a successful Kickstarter to publish a Ninjasaur graphic novel. Why did you decide to do an app as well?

Jason Horn: Actually, I began work on the Ninjasaur app before I decided to do the Kickstarter for a trade paperback collecting all of the print and webcomics. My app co-creator, Ben Morrison, is an iOS app developer (and a close friend) that was working on several of his own apps. We started talking about developing the Ninjasaur app but knew we’d have to wait a while before he’d have time to code it all.
In the meantime, I was watching comic book projects on Kickstarter gain momentum. Late in 2011 I decided to do the Kickstarter. This was a little before comics exploded on Kickstarter, but thankfully it all worked out.

Your app has a feature that allows the reader to see the story in different stages—pencils, inks, colors. How complicated was that to put together?

The coding process didn’t take that long for Breakdown (that’s the name for the art reveal feature). What took a while was figuring out what type of feature would utilize the iPad’s interface in a way that added value to a comic book app. Ben and I discussed a few ideas and Breakdown was what we finally settled on.

Who were you doing it for—who do you think will be interested in seeing the different stages?

I think anyone interested in comic books is probably also interested in the art process. Most people know the various stages of development but you almost never get to see them all, much less read an entire story in each stage. It allows the reader to see all the major and minor tweaks I made with just a swipe down the tablet. At conventions this year, I’ve been showing off that feature of the app and everyone has loved it. Kids love it because they kind of feel like they’re getting to deconstruct the art and rebuild it themselves.

The generation of kids growing up now realize that content on tablets is interactive. I think they almost expect something more from what they read on iPads. But I didn’t just want to add something silly like a motion comic. I wanted Breakdown to truly be an added value. Which is also why we added the game.

Why did you decide to add a game to the app? How do you think that enhances the experience? Or is it just for fun?

In the end, the game is definitely just for fun. Ninjasaur is an all-ages comic and when I was telling kids that he was going to be on the iPad, they assumed that meant that they’d be able to play a game as Ninjasaur. They were almost sad to hear that it was just a comic. But I realized, why not also add a little game where the comic ends that lets them continue the story as Ninjasaur.

Again, I wanted a little added value to the app. With the Ninjasaur app you get a 26 page story that lets you read the story in any art stage and you can continue the story in the game. All that for $0.99 seems like a bargain compared to the standard $2.99-$3.99 for one issue of a digital comic book. And most of those comics are only rented from a company that may or may not continue to license that comic. With Ninjasaur, you have the story. It isn’t going anywhere once it’s on your mobile device!

The end of your story leads into another one. Do you plan to make more Ninjasaur apps or will you use this somehow to encourage people to read the webcomic or the print comic?

I am planning on making more apps and maybe not just more Ninjasaur apps. When my fellow indie comic creators saw the app, the first thing they wanted to know was when we could do the same for their comics. If the Ninjasaur app is successful, I plan on creating similar stand-alone comic apps for my fellow creators. So, if you’d like more indie comic book apps, tell your friends about Ninjasaur!

How did you get the idea for Ninjasaur—and why did you decide to stick with it for so long?

I came up with the word after a convention in 2006. I didn’t know right away what I’d do with it. And even after the webcomic started, I didn’t know it going to be an all-ages story. At conventions, kids started buying the first issue and I freaked out. I should have realized that a dinosaur ninja would be exactly what kids would want. There was nothing inappropriate in that first issue, but after that I just kept kids in mind a little more when I was writing.
I’ve stuck with it because I love comics. Telling stories with pictures is an amazingly effective art form. And honestly, kids love the character. There was a little girl dressed as a princess at HeroesCon in 2010. As she walked by my table, her eyes lit up and she grinned from ear to ear. Her dad let her buy the book and it made her so happy. That little girl is why I’ve stuck with it.

Any plans for more comics, apps, or games in the near future?

I’ve got a few comics in the works now. I just finished the latest Gruff. It’s my comic book continuation of the old Billy Goats Gruff folktale. It’s only a print comic as of now but I’d like to do a similar app for it someday. And I’m working on the next Ninjasaur comic now. I update the Ninjasaur webcomic every week, so that’s always a constant project. And I’m working on a few other things that need to be nailed down a little more before I can talk about them.

I saw this as an iOS app. Is it available on any other platforms? And why did you choose iOS?

So far the app is only available on Apple devices, but depending on the popularity, we’ll consider developing it for other platforms. We chose iOS because that’s the framework Ben is more familiar with. His other apps, such as the popular word game Swipe Four, were built for iOS. We decided to start in a familiar territory.