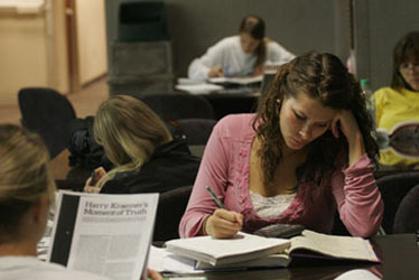 There have been a number of reports that have been published over the past two years that study the reading habits of students. The vast majority have proclaimed that students prefer print over digital textbooks, even if they get the digital editions for free.

American University linguistics professor Naomi S. Baron, author of the book “Words Onscreen: The Fate of Reading in a Digital World.” Baron led a team that asked 300 college students in the United States, Slovakia, Japan and Germany how they preferred to read.

They found that physical textbooks were the medium of choice, with 92% of the respondents saying they preferred print over an array of electronic devices.

The findings in this latest report echo similar ones that have been conducted in recent times. HP talked to 527 students at San Jose State. 57% of the respondents said they prefer the standard textbook. A paltry 21% said they prefer the digital variant and 21% stated that they utilize both formats.

I think one of the major problems with digital textbooks is that some schools do not even offer an electronic option when it comes to proprietary texts. For example, Lower-division math classes require special UC Berkeley editions of otherwise commonplace books. These special editions tend to include the exact same content as other books, but the content is shifted around to more accurately reflect the lesson plans and schedules of the math department. The school does this in order to make more money selling print, while at the same time excluding second hand and digital sales.