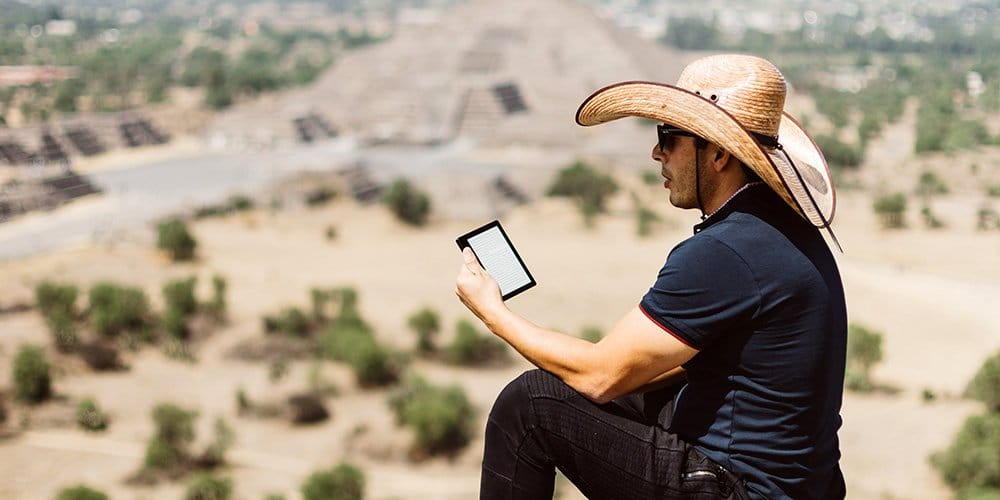 Over the course of the last two years the modern bookstore has been undergoing a resurgence in sales. The publishing industry have all reported that e-book revenue is down between 2-6% year on year and 12% across the board. The funny thing is, publishers  for the most part are making more money, primarily due to higher e-book prices, but most are seeing a modest increase in print sales.

Why are bookstore chains like Barnes and Noble enjoying a robust increase in book sales? I think the main reason is because they only stock physical books by new authors that the publisher is really hyping and perennial bestsellers by recognizable authors. Simply put, it is far easier to discover a great book in a bookstore, than try and find one online. So why are digital sales truly down? The answer is too many e-books being self-published by indie authors.

Independent and self-published authors release more books on a monthly basis than the trade houses do. This creates an influx of new titles that fall by the wayside and pollute the search engine results,  so it is almost impossible to casually browse and find something good.  E-Books are immortal, so they never go out of print. Like cobwebs constructed of stainless steel, they will forever occupy the virtual shelves of e-book retailers. Every month there are more and more books for readers to choose from and there are now fewer eyeballs split across more books, this is the real reason why e-book sales are down across the board.

Not only do self-published authors write legitimate books that nobody reads, but some are doing some very shady things. One enterprising software engineer posted 800,000 Kindle titles that were written by an algorithm and there is a growing trend of authors taking advantage of Kindle Unlimited to redirect people from the first page of the e-book to the end, so they instantly make the full amount of the monthly pool of funds.

Self-published e-book have also generated a ton of negative publicity. In 2013 a global firestorm erupted due to hundreds of adult eBooks with topics ranging from threesomes to incest were listed in the same category as kids books. This has resulted in UK bookstore WH Smith shuttering their entire online bookstore. Kobo deleted close to a thousand titles on their platform and giving a scolding to the vanity presses and indie authors who were responsible. The metadata problem continues to run rampant even today.

Spamming out e-books is obviously working for indie authors right now. In two short years, the market share of paid unit sales between indie and Big 5 e-books has more than inverted. The Big 5 now account for less than a quarter of e-book purchases on Amazon, while indies are closing in on 45%. 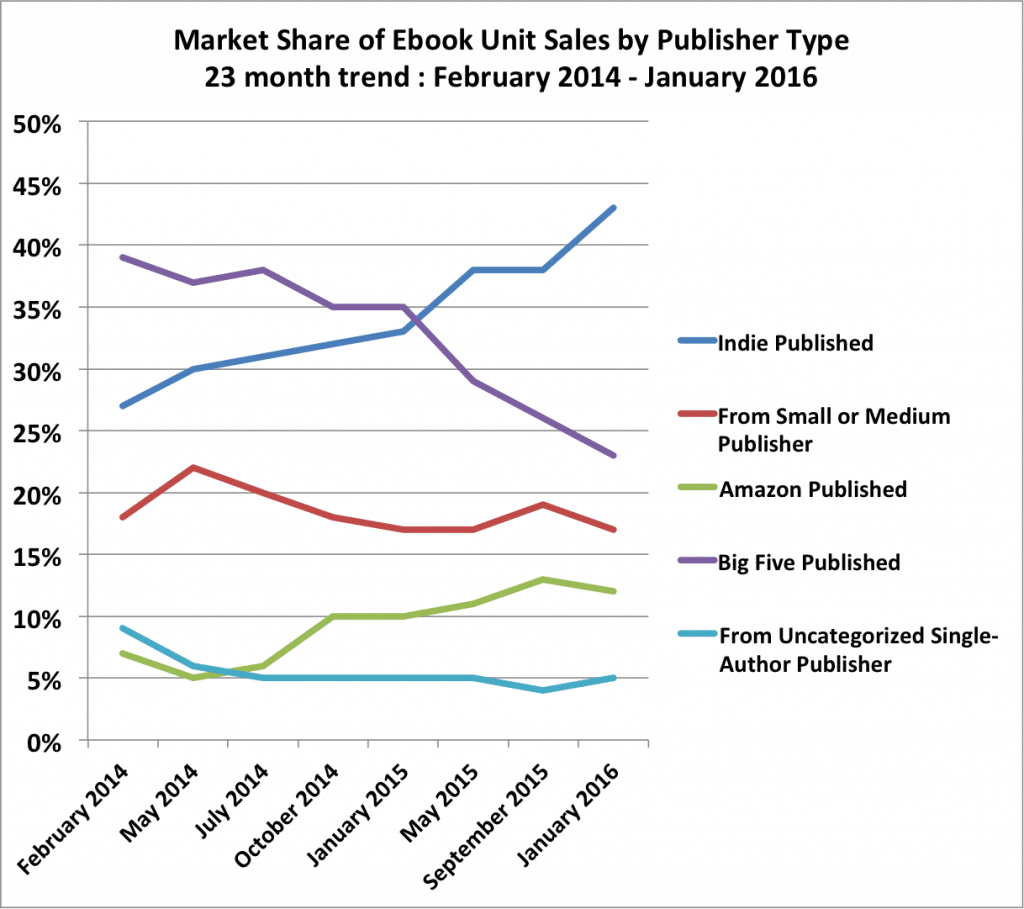 The big reason why indies are enjoying more success right now is because their titles are priced anywhere between .99 and $5.99, while major publishers tend to charge between $9.99 and $18.99.  In January 2016 the Authors Earnings website reported the following;

I think indie authors days are numbered selling digital content online because of big new trends in the publishing industry that they are unable to capitalize on. One example are adult coloring books, which many credit them with saving the traditional publishing industry’s overall 2015 sales figures… a claim borne out by Nielsen Bookscan’s print-sales numbers. In the first three months of 2016 11 out of Amazon’s Top 35 Best Selling print books were adult coloring books.

The CEO of Smashwords, Mark Coker had some interesting thoughts on what customers are starting to notice about indie e-books.

Some of the brightest minds in the publishing industry also agree that there are too many indie e-books being published right now and this is leading to a decrease in overall digital sales in the United States.

“If you’re not an author with a slavish fan following, you’re in a lot of trouble,” self-published author Bob Mayer told the NYT’s David Streitfeld. “Everyone already has a ton of things on their Kindle they haven’t opened.”

Chuck Wedig mentioned in a recent blog post “The sheer number of releases is an issue all its own. It becomes increasingly hard to stand out merely by publishing a book in either form. It’s like trying to get a droplet of water to stand out in an entire goddamn ocean.”

He went on to say “The issue becomes more complicated when you add in the fact that, in my opinion, a whole lotta these author-published releases are going to be the equivalent of smearing poopy handprints on the windows of your Plexiglas enclosure. This is par for the course, maybe, because one of the features of self-publishing is that the door is open to anyone. Everyone. Always. No bouncers at this nightclub door, which is fine, but that also means you get folks with no shirt and no shoes. You’ll get folks dressed to the nines in sharkskin suits and you’ll also get wild-eyed dudes who are eating goulash out of rubber boots and who are quietly masturbating in the corner. You let anybody swim in the pool and, well, anybody can swim in the pool. With so many people trying to find something good to read, the indie books become more noise than signal.”

Some people just don’t see why people should self-publish at all.  Andrew Franklin, founder and managing director of Profile Books, blasted authors who self-publish. “The overwhelming majority of self-published books are terrible—unutterable rubbish, they don’t enhance anything in the world.” He ranted on by saying, “These books come out and are met with a deathly silence, so the principle experience of self-publishing is one of disappointment. I was very shocked to learn you can buy Facebook friends and likes on social media. That is what passes for affirmation in what I think is the deeply corrupt world of self-publishing.”

My suggestion  is for all major online bookstores that take submitted indie content to create their own sections for self-published writers. These titles should not be listed side by side with the traditional press as they are now.

Indie e-books should have their own dedicated sections until such time as they reach a certain threshold in sales. Once they can attain an arbitrary sales milestone, they are drafted to the big leagues and listed in the main bookstore.  This idea has merit as every single sports organization in the world as the minor leagues and the big leagues. The minor leagues purpose is to hone talent and develop them into good athletes, who eventually get the call up.

I think segregation is the only answer for the publishing industry. Amazon will sell more titles from major publishers and major publishers will generate more money. It will be a boon for the average reader because they will find quality books and get them continuing to support the digital format, instead of flipping back to print.

People love their bookstores, it is easier to find something you would want to read. Things are organized in neat little shelves with new titles near the entrance and new and notable titles being promoted. In an online world, there are so much indie trash everywhere that it is next to impossible to have a great shopping experience. This is why indies have ruined e-book sales in the last year and more people are shopping  in the real world.

Amazon and the major publishers must adopt segregation for the survival of the e-book format.