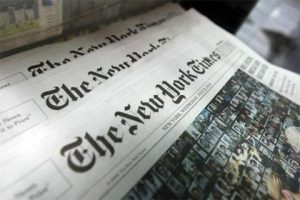 One of the greatest media for the print versus digital divide is the newspaper industry. As more daily print newspapers around the country close, from the  long-standing family-owned papers to corporation-sized outlets who once held millions of subscribers, that arm of the publishing world is struggling to adapt and stay afloat.

With more readers relying on tablets, e-readers, and smartphones, even for their news reading, newspapers that couldn’t make the switch to a digital edition, even if it was nothing more elaborate than a daily website source that subscribers could access via password, seem to have fallen by the wayside. Other papers sought to avoid alienating print readers by limiting the number of days of circulation, some dropping to only three days a week or offering Sunday-only subscriptions.

However, new information has been released that suggests that tech-savvy newspapers who set their sights on digital advertising to meet their costs may be very disappointed. According to an article by Rick Edmonds for Poynter.org, the Newspaper Association of America posted some marketing information recently that shows digital ad revenue fell short of expectations.

While print ad revenue slowed down its rate of decline by nearly a percentage point, digital revenue from advertisers actually rose. Unfortunately, that rate of growth never topped more than three percent, which means newspapers are losing print ad revenue at a far greater rate than they are gaining digital.

In order to stay ahead, newspapers have had to resort to layoffs and focus on the circulation revenue, which is actually working for the second quarter of this year. The NAA also feels that the second half of this year will show some growth over the first.