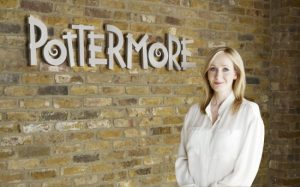 JK Rowling’s innovative Pottermore company, which oversees the interactive website, the sale of the entire Harry Potter ebook collection, and maintains a partnership with the Sony Wonderbook game based on the world of Harry Potter, announced yesterday its replacement for former CEO Charlie Redmayne.

Susan Jurevics, formerly a Senior Vice President at Sony, said in a press release, “I am delighted to be joining Pottermore, a business I know well already, to take it into the next exciting stage of its development. A world of new opportunities is opening up and Pottermore will be there at the forefront of digital innovation. I’d like to thank Julian Thomas for taking the helm in the interim and I look forward to working with him, the fantastic team now in place at Pottermore, J.K. Rowling, and the team at The Blair Partnership.”

Rowling is undeniably one of the most well-appointed authors when it comes to taking ownership of both her career and her content. Retaining the digital rights to her multi-book boy wizard series at a time when no one predicted the current popularity of e-reading afforded her the opportunity to maintain complete control over the digital rights, even as her publisher remains the rights’ holder for the print editions. This foresight allowed her company to be the exclusive seller of the ebooks, distributing them for unheard of royalties through major online retail platforms.

Whoever heads up the entire Pottermore company, fans and users can rest assured that only more innovation will come from the team effort of Rowling and her staff.