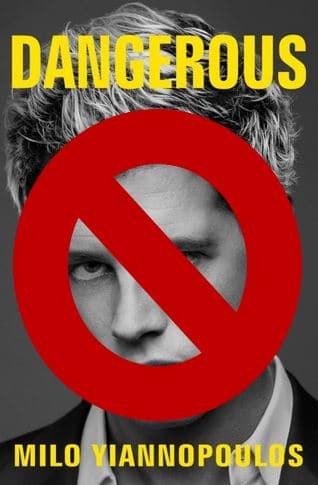 It’s a tough day to be a jerk, as Milo Yiannopoulos is still learning. The self-styled “provocateur”–which is polite speak for arrogant, flippant, sub-bridge dwelling troll–has lost both his book deal and his high-dollar CPAC speaking engagement in the course of a single day. His alleged crime? A video has surfaced which purports to show him advocating for legalization of pedophilia at worst, and being offhanded about child sexual abuse at best.

This is far from the first controversy surrounding the Breitbart darling, who despite being openly gay is inexplicably a posterboy for the US conservative political movement, a group that prides itself on family values and Christian morals. It’s also perhaps not the worst part of Milo’s day, as a senior editor from Breitbart News has also stated in an interview that high-level members of the company are ready to quit their jobs if Yiannopoulos isn’t terminated immediately.

But where does Simon & Schuster fall in all of this? The $250,000 advance the publisher gave Yiannopoulos for the rights to his no-longer-forthcoming book may be gone, unless there was some contractual clause that demands he return it if the publisher pulls the deal for making them look bad. The publisher has already suffered its share of flaming spears due to this deal, as Roxanne Gay publicly abandoned S&S over it, and the Chicago Book Review declared they will not review a single S&S title this year over the decision to publish Yiannopoulos’ book.

The book deal was announced despite Yiannopoulos’ own tongue-in-cheek statements that he did everything he could to repulse the editors at S&S, adding that he thought they would escort him from the building; instead, they gave him a “wheelbarrow full of money.”