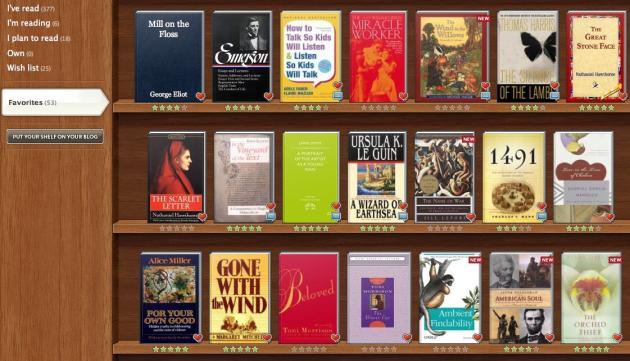 Shelfari launched in 2006, a few years before the big e-book boom. Amazon was an early investor in the company and then bought it outright in 2008. The website allows users to build virtual bookshelves of the titles they own or have read, and can rate, review, tag, and discuss their books. Users can also create groups that other members may join, create discussions, and talk about books, or other topics. Does the Shelfari concept sound familiar? It basically was the precursor of GoodReads, which Amazon also owns. Today, Shelfari announced that their website was closing and all of their data was being merged with GoodReads.

One of the big problems with Shelfari is that it was launched before e-readers and tablets became popular. The company never got around to providing a slick user interface or released high quality apps for Android or iOS. This is why GoodReads exploded so fast, everything was very modern and appealed to the smartphone generation.

TheReadersRoom is certainly not happy about this move. “The worst thing about the whole “merger” is that Amazon is giving Shelfari members just two months to move all their data over to Goodreads. I actively participate in two Shelfari groups that have been operating since 2008/2009 and have thousands of discussion threads, challenges, and games. The move will likely kill one of those groups completely and severely impact the other. So two months just doesn’t cut it – it is rude and sends a message that Amazon doesn’t truly care about some of its best customers.”

A user by the name of Anita is also discouraged “While I understand Amazon’s desire not to run two sites, one that it will not be updating, what I find hard to fathom is their unwillingness to work with group administrators to facilitate the move of their groups. What’s worse is that I am pretty sure the Shelfari product managers know that the reason all the people haven’t migrated is because they like nested messaging so that conversations can be deeper and more thoughtful. That’s a feature that I’m pretty sure could have been implemented in the many years Amazon has controlled Goodreads. So as a result, arguably some of Amazon’s biggest book reading customers will be disenchanted and may move to alternative web sites. Communities that have been together over seven years will cease to exist, and these communities DRIVE book sales and ereader sales. I would say the average reader in my group is reading 65 books a year. And we all write reviews of our books – – in great part because that is the foundation of it – – and often post those reviews in multiple places (blogs, Shelfari, Goodreads, and Facebook). Unfortunately, it’s a situation where business interests win, but I think if Amazon really cared, it could have subsumed Shelfari – – groups, members and all – – into Goodreads, so that our communities could continue. But I suspect that once again, our over regulated climate prevents unsuspecting consumers from being placed on a site they did not choose . . .so no one wins.”

Meanwhile Linda mentioned “I am absolutely devastated by Amazon’s decision to shut down Shelfari. I have been a member there for 8 years and have been one of 4 administrators that has been one of the most active groups on the site since its inception 7 years ago. Our group is filled with book lovers who not only love to read but enjoy discussing, dissecting, recommending and reviewing books. We have become a community, many of us have become friends in real life, not just on the web. We have met and gone to book festivals and shared in each others joys and sorrows. We care deeply for all our members. And today Amazon (of which I am a long time Prime Member) yanked the rug from under us. It didn’t come as a shock exactly, since they basically abandoned the site when they bought Goodreads. But to give us just two months to find a new home and being told they will not migrate any of our discussions is heartbreaking. We have years of discussions, reviews, challenges, lists and more. To have it all end without much support from Amazon is heartbreaking. We administrators will spend the next few weeks trying to copy and save all the discussions we find most vital to our community. I feel as if Amazon turned it’s back on us. Overwhelmed at the loss.”