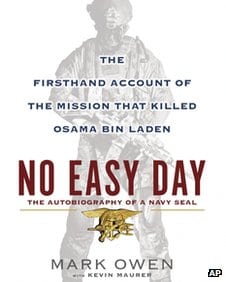 With so much great military writing on the market, both in the fiction genres and in the non-fiction true drama titles, it’s hard to make a single book stand out. Mark Owen, a member of the now famous SEAL Team Six who brought down Osama Bin Laden, did an amazing job of getting attention for his non-fiction book No Easy Day: The Firsthand Account of the Mission that Killed Osama Bin Laden by divulging an inside look at the preparation and the mission to bring down a terrorist mastermind.

But more than the accurate behind-the-scenes look at one of the pivotal events in recent history, what really makes Owen’s work stand out is not the detailed description of the high profile manhunt or the months of training using the latest in military technology. It’s the complete humbleness with which he describes the efforts of many people to do a difficult job that simply needed doing.

Even as Owen describes having to literally sit on Bin Laden’s dead body in the helicopter because there were no seats left for all of the SEALS after the first helicopter crashed, there is no glory-hounding or gung ho mentality that is so prevalent in much of the non-fiction and the military fiction books. These highly trained professionals were given a job to do and they did it. No one bragged or chest bumped when it was over. Bin Laden’s body wasn’t dragged through the streets or put on display, it was quietly placed in a helicopter and flown away.

Some moments of the book are so human that at first glance I even had to wonder if they were genuine, but after reading Owen’s accounts and the credit he gives to everyone involved in doing a tragic-but-necessary job, there is no way his humanity is simply for sympathetic effect. He described the need for explosives on the downed Black Hawk helicopter that crashed in Pakistan, a way to ensure that the technology wasn’t used by enemy forces; but it was Owen himself who shepherded all of the women and children living inside Bin Laden’s compound back into the safety of the guest house so that they would not be hurt when the explosives went off.

This book speaks to a larger audience than just military or political buffs, but to anyone with a vested interest in the workings of the War on Terror. No Easy Day is available from Amazon, Barnes and Noble, Kobo, and more.