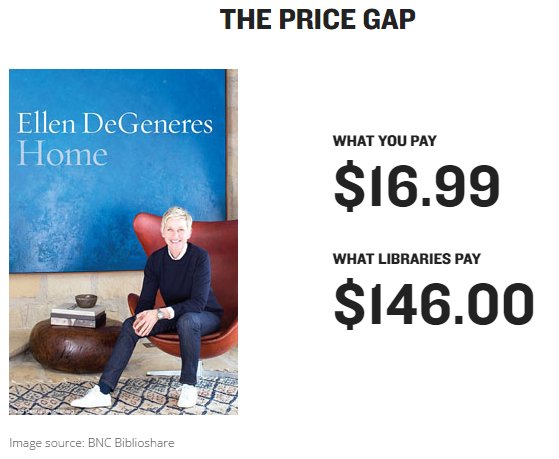 The main premise of FairEbookPrices has to do with lobbying the government in Ottawa and building public awareness on just how much libraries are spending on e-books. The latest novel by J.K. Rowling aka Robert Galbraith retails on Amazon for $16.99, but libraries pay $117 per copy. James Patterson’s latest Alex Cross is $14.99 on Kobo, but libraries are paying $121.00 per copy.

The big problem that libraries in Canada face is that publishers have no unified pricing strategy and they all have different terms and conditions.

HarperCollins
License: 26 loans then must repurchase
Prices: Varies, generally not more than cost of HC equivalent and often less

Simon & Schuster
License: Expires after one year, then must repurchase (experimenting with 2 yr term for 1.5x price)
Prices: Generally more than consumer cost, but less than hardcover

The movement to make the plight of libraries known to the public is starting to pay off. The CBC did a national story on it last June and on March 31st 2016 a number of prominent librarians staged a Twitter chat and thousands of people participated.

I have talked to a number of librarians who belong to this organization and they hope more publishers start to emulate Penguin/Random House. On January the 1st 2016 Penguin Random House has implemented new terms for libraries. Every new e-book that is purchased from companies like 3M, Baker & Taylor and Overdrive will have a perpetual license.  Additionally Penguin Random House e-books will now range from under $20 per title to a newly set maximum of $65, reduced from the current maximum of $85 US and $95 CAD.