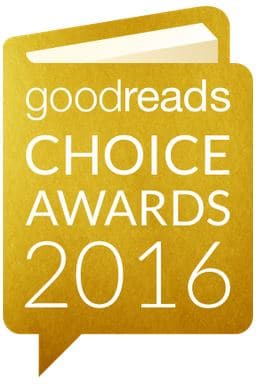 Some book awards are determined by panels of expert judges who seem to be fairly out of touch with the interests of the typical reader. Still others are the domain of the “inner sanctum” club where publishers and powers that be proclaim which books are worthy. For my part–and that of many avid book fans–those awards pale in comparison to being chosen by a vast sea of actual readers, such as in the case of the Goodreads Choice Awards.

How large is this voting pool of book lovers? Over three million votes strong in a wide variety of categories, broken down even so far as by age group. The 2016 round of the awards included some interesting firsts, such as the first time a father and son each won their own awards, a first for the highest number of votes a single book has ever received in any year, and a few authors who’d been nominated in the past and finally won this year.

While complete details of the competition and the descriptions of each winning title can be found in a post by Goodreads, the list of winners is below. Be sure to check out each title as some of the publishers have submitted copies of the book as giveaways; the entry button will be found on the Goodreads page for that title if it is included in a giveaway.

Fantasy — Harry Potter and the Cursed Child by Jack Thorne

Horror — The Fireman by Joe Hill

Humor — The Girl with the Lower Back Tattoo by Amy Schumer

History & Biography — Leonard: My Fifty-Year Friendship with a Remarkable Man by William Shatner

Science & Technology — Are We Smart Enough to Know How Smart Animals Are? by Frans de Waal

Food & Cookbooks — Cravings: Recipes for All the Food You Want to Eat by Chrissy Teigen

Romance — It Ends with Us by Colleen Hoover

Young Adult Fiction — Salt to the Sea by Ruta Sepetys

Young Adult Fantasy — A Court of Mist and Fury (A Court of Thorns and Roses, #2) by Sarah J. Maas

Middle Grade & Children’s — The Hidden Oracle (The Trials of Apollo, #1) by Rick Riordan

Poetry — The Princess Saves Herself in this One by Amanda Lovelace