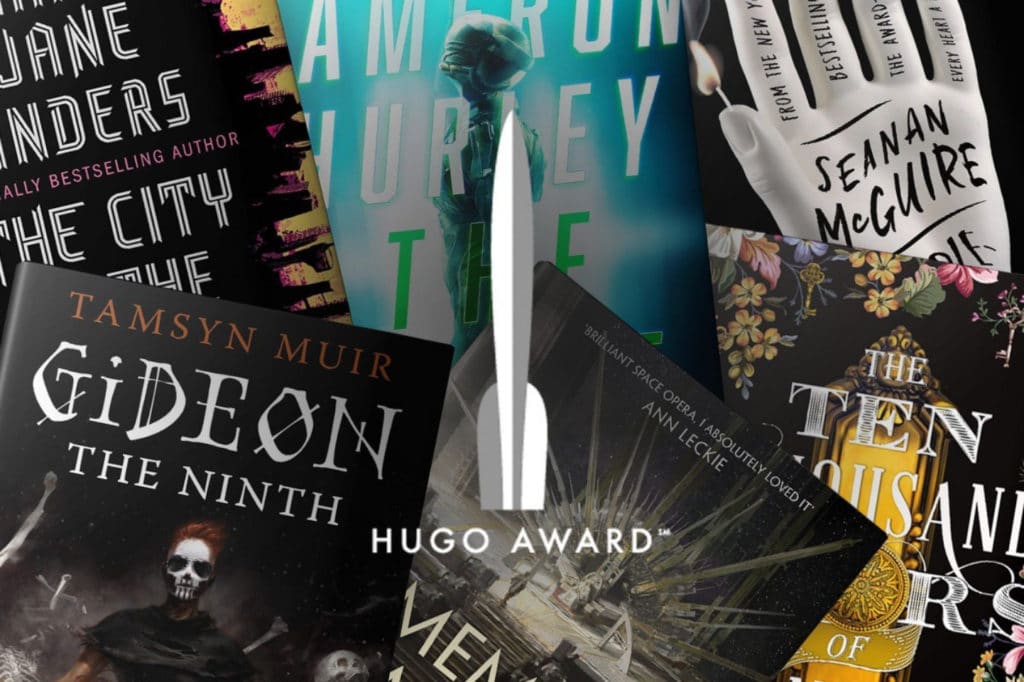 The Hugo Awards are among the most respected awards in the science fiction community and fantasy community. If you are looking for a great new read the 78th World Science Fiction Convention announced the finalists of the Hugo Awards, with the winners to be announced during the first WorldCon virtual convention in August.

Charlie Jane Anders’s second novel after All the Birds in the Sky is set on a planet colonized at some point by Earthlings, but whose human denizens no longer understand the technology that got them there. Nor do they understand that the “crocodile” creatures who live on the dark side of the planet are sentient. After being exiled into the dark and presumed dead, Sophie learns that the crocodiles are far smarter than any human suspects, and she slowly befriends them. But the political tensions between the humans’ two cities are about to overboil, and Sophie’s alliance with the crocodiles might be the one thing that can save everyone.

Gideon the Ninth by Tamsyn Muir

All Gideon wants to do is leave the Ninth House and join the military. But when the all-powerful and undead ruler of the galaxy asks the Houses to send their best necromancer and cavalier to compete to become the ruler’s newest advisors, the Ninth House leader coerces Gideon to join her in an audacious grab for power. But the other Houses want to win as well. As cavaliers and necromancers start getting killed in mysterious ways, it becomes clear that something far stranger is afoot. Gideon’s voice—hilarious, irreverent, and yet innocent of malice—propels the action forward in a rousing adventure that is a mix of Agatha Christie’s And Then There Were None and an unpredictable D&D campaign.

The Light Brigade by Kameron Hurley

Kameron Hurley’s hard-edged yet scruffy SF adventure mixes high-octane action with too-close-to-home thoughts on citizenship, humanity, and sanity. Young Dietz joins the Light Brigade—Earth-born troops fighting Mars who go through brutal training to prepare them for being broken down into light to far-off battlefields in the blink of an eye. But light-speed travel wreaks havoc, and Dietz begins to wonder whether he’s fighting on the side of good, or whether there is any such thing when you’re a pawn in a war. The book’s jacket copy compares The Light Brigade to Starship Troopers and The Forever War, and the comp is a strong one.

Diplomat Mahit Dzmare is sent to the capital city of the massive Teixcalaani empire to represent 30,000 souls living in an independent mining station on the edge of Teixcalaani space. Riding along in Mahit’s brain are the memories of the former ambassador, though the memories, suspiciously, are ten years out of date. As Mahit is swallowed by sophisticated Teixcalaani protocols and traditions, she becomes the bone that sticks in the throat—unwilling to accept not only the flimsy story around her predecessor’s sudden death but also the empire’s desire to swallow her people. Mahit’s gritty spywork, diplomatic sleight-of-hand, and heightened awareness of the power and enticement of the empire’s embrace make A Memory Called Empire an unforgettable read.

Middlegame by Seanan McGuire
One of the things I appreciate most about Seanan McGuire’s stories is that she has Ideas, and those ideas are rarely regurgitated in slightly different form from book to book. Plus, she crafts characters like she loves them, warts and all. Middlegame ambitiously pulls together alchemy, twins with spooky powers, and a villain who is playing a truly long game, and its atmospheric edge is as sharp as a scalpel.

The Ten Thousand Doors of January by Alix E. Harrow

In the early 1900s, a young woman embarks on a fantastical journey of self-discovery after finding a mysterious book in this captivating and lyrical debut.
In a sprawling mansion filled with peculiar treasures, January Scaller is a curiosity herself. As the ward of the wealthy Mr. Locke, she feels little different from the artifacts that decorate the halls: carefully maintained, largely ignored, and utterly out of place. Then she finds a strange book. A book that carries the scent of other worlds, and tells a tale of secret doors, of love, adventure and danger. Each page turn reveals impossible truths about the world and January discovers a story increasingly entwined with her own. Lush and richly imagined, a tale of impossible journeys, unforgettable love, and the enduring power of stories awaits in Alix E. Harrow’s spellbinding debut–step inside and discover its magic.