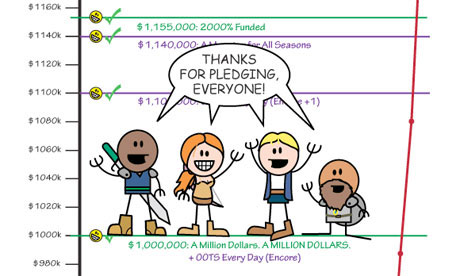 When Kickstarter first launched in 2008, it had aspirations to tap into a massive pool of crowd-soured financing. The company has funded a diverse array of endeavors, ranging from indie films, music, and comics to journalism and video games. Graphic Novel artists and writers are finding tremendous success on the platform and it has quickly become the 4th largest publishing company in the world.

The United Kingdom publication ‘The Guardian‘ said recently that “Research by US book industry magazine Publishers Weekly puts Kickstarter—which is set to launch in the UK later this year—in fourth place in a ranking of the US’s top five graphic novel publishers over the three-month period from February to April. Seven of the site’s graphic novel projects raised more than $40,000 over the period, 25 of the 115 successfully funded projects earned five figures, and one—Rich Burlew’s The Order of the Stick comic—made $1,254,120.”
Order of the Stick was based on a web comic that has been going strong for the last six years and has a dedicated legion of fans. In the past, Rich has self-published various compilations of his series in tangible book form, but did not see it in the retail sphere. “Kickstarter made $2.2m in gross revenue over the three months, Publishers Weekly estimates, behind Marvel ($6.9m), DC ($4.3m) and Image ($2.98m).”

The essence of Kickstarter is that it enables its creators to offer different financial incentives for backers. This gives people the ability to add tiers of investment and if the financial goals are met the project can go forward. Burlew’s Order of the Stick comic—the most funded creative work in the site’s history—was set up so users could pay $10 for an Order of the Stick fridge magnet and a digital PDF of the original comic story; $200 for books, prints, and autographs; and $5,000 for a walk-on cameo for the donator’s original Dungeons & Dragons character.

Kickstarter is becoming one of the largest avenues for publishing in graphic novels and many authors are finding it a viable means to finance their other endeavors. Seth Godin recently started a campaign back in June for a new book. Within three hours he met his goal of $40,000 and a few hours after that surpassed $100,000.

If you are an established author or graphic novel artist, you will have an easier time getting your funds from the average person and your legion of fans. New people to the industry face an uphill climb in convincing the public that your project has viability. When people invest in a project in Kickstarter, there is no mandate that a project has to be seen to compilation. This is why established players with a strong track record often get the most funding because they have a history of seeing things through.