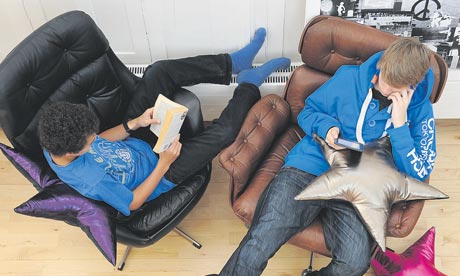 A widely held belief that has long reduced parents, teachers, booksellers, and publishers to tears is the sad state of reading priority exhibited largely by boys. It’s a common stereotype that boys make up the bulk of the “struggling” or reluctant readers, a belief that relies on compilations of different sources like book sales and “fill in the bubble” standardized test scores to produce “facts.” But a new report from Nielsen sheds some light on what may be a reported increase about boys’ reading habits.

Porter Anderson of Publishing Perspectives gave a rundown of the Nielsen Book’s recent presentation on the increase in children’s book sales, with particular attention paid to the “steady climb” of book purchases for boys ages 9 to 12. It’s important to note that this is not the Twilight/Hunger Games phenomenon; in recent years, the surge in sales of YA fiction was taken to be a sign that more and more young people were reading, but that was quickly dispelled once the industry understood that YA fiction was drawing in massive crowds of adult readers.

Using its powers of polling, Nielsen discovered who the books are being purchased for, what types of books are being bought, but most importantly, why the books were bought. It’s not enough to say that more young people are reading due to an increase in book sales around the holidays, as that good indicate gift giving by people who were clueless about the tastes and interests of the recipient. Nielsen’s polls have broken the questions down in order to understand why the book was purchased–such as at the recipient’s request–rather than just that a book did sell.

One of the most interesting points was the genre. Most consumers might automatically assume the increase is due to fantasy series like those by Rick Riordan, or the popularity of “awkward stage” characters like the Captain Underpants series. However, Nielsen discovered that this age group and gender demographic are reading far more non-fiction than most book buyers would believe, which speaks to a strong need for more content from publishers and indie authors.