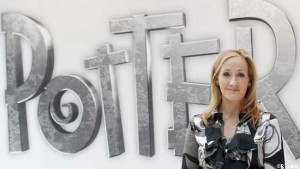 Author JK Rowling has been busy over the course of the last year. Besides her work on the wildly popular Pottermore interactive fan site and the re-release of her entire Harry Potter series with new commemorative covers–not to mention two published books and a third one on the way–the author recently announced that she will be screenwriting a new film in the Harry Potter franchise, “Fantastic Beasts and Where to Find Them.”

Rowling has proven herself to be very much in charge of her content and her career, making the incredibly foresightful decision when her titles first reached publication to retain her digital rights to her books, despite the fact that no one at that time could have predicated the impact of digital publishing.

Rowling had once remarked that she would only add to the Harry Potter series in some way if she had an exciting project to incorporate, basically not closing the door on the possibility but certainly not putting the boy wizard in the forefront. In this project, Rowling will get to help pen the script for a storyline that will involve the fictional author of a wizarding textbook of the same name as the film, written by a character named Newt Scamander.

The film is a parallel story, like so many authors have been able to experiment with their own works. Without being an addition to the original storyline of Harry Potter, this title will exist alongside the plot in those titles. Harry and his fellow wizarding students use the textbook in the popular series.