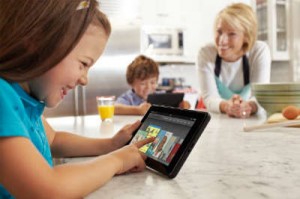 Non-profit industry tracker BookNet Canada released the results of a fall online survey to investigate the digital attitudes and practices of a variety of readers. Polling participants about the practices of young children, teens, and adults, with 823 adults and 221 teens responding, BookNet Canada discovered some telling things about the perceived state of ebook adoption.

According to the findings, 41% of adults and 27% of teens identify themselves as regular ebook readers; of the teens who state that they do read ebooks, there was a fairly even split as to how many preferred print and how many preferred digital, indicating that ebook adoption–while prevalent–wasn’t a major factor in reading for teens.

The data on devices utilized for reading was very interesting. With more respondents using a tablet than a dedicated e-reader, even the children were involved in tablet activity. Sixty percent of those under four had regular access to a tablet, while that number jumped to 80% for children ages eleven to thirteen. Teens report having access to an average of 4.8 devices each, while parents typically stated the per household number of devices was almost seven. Despite this wide availability, though, parents who responded that they read with their children still choose print; only one in four parents said they read ebooks with their kids.

But what does this data indicate for the future, other than a steady embedding of digital reading in the culture?

“Even parents who don’t currently read ebooks predicted that they would be e-reading in the future,” says Pamela Millar, BookNet Canada’s Director of Customer Relations, in a press release on the study, “so we can conclude that this trend is likely to pick up steam.”

The full press release of the survey findings can be found HERE.