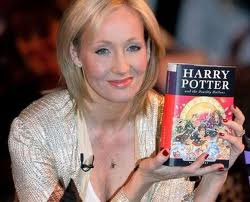 As if the cryptic countdown clock on her new website wasn’t enough to spark viral speculation, along with a video announcement that later appeared on the site promising ebooks, interactive content, virtual worlds, and more, today author J. K. Rowling severed her contract with her agent of sixteen years, Christopher Little.

Little came on board and helped bring the very first book in the world-famous Harry Potter series to fruition, and remained Rowling’s agent through all seven books in the series and the accessory book, Tales of the Beedle Bard. Little was blindsided by Rowling’s decision, as he apparently helped a great deal on the Pottermore project.

But someone else had a lot to do with Pottermore. Neil Blair, a lawyer and employee at Christopher Little Literary Agency, came on board after the publication of Rowling’s fourth book in the series, Harry Potter and the Goblet of Fire. Rowling will be joining the newly-formed Blair Partnership for the launch of her new Pottermore venture.

At this time, there is a lot of speculation swirling around the entire situation. It isn’t clear to anyone, Christopher Little included, as to why Rowling severed ties, as neither she nor Blair are speaking on the subject; the website for Christopher Little Literary Agency is currently offline with a notice that it is being updated, possibly to remove Rowling’s content. There are several reports circulating that Little is considering legal action, but it’s hard to say on what grounds given that everyone involved is keeping silent, for now at least.