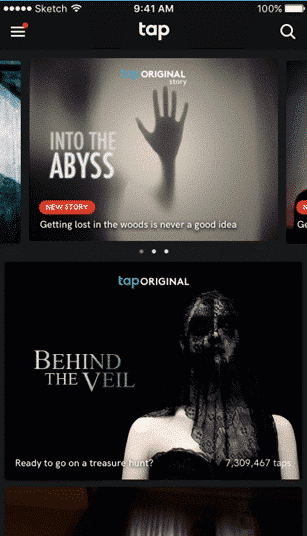 Six months ago Wattpad launched a new app called Tap,  which offered chat-style stories. The stories unfold via chat messages, as if you’re reading someone’s text conversation. You move the story forward by simply tapping to reveal the next part.  In the first few weeks of its release, 125 million users read the stories and downloaded the app. In order to take Tap to the next level, Wattpad has just unveiled Tap Originals.

Tap Originals offers curated, commissioned stories, developed in partnership with top-tier writers. Tap Originals supplement the over 300,000 existing stories in more than 10 languages already available on Tap. These new stories are produced by experts in creating high-octane, realistic chat content. Readers can look forward to new stories across a spectrum of genres like suspense, horror and drama.

Tap Originals also brings chat stories to life in a new way by weaving multimedia into each story, inspired by the ever-evolving ways our phones allow us to communicate. Stories will go beyond text, bringing plotlines and key moments alive with enticing features like video, sound, images, voice notes and even choose-your-own-ending. Social storytelling has never been this lifelike.

I think Wattpad is really onto something with Tap, it is a new way to tell stories. It even prompted Amazon to launch their own rival service called Rapids, but it costs a monthly subscription fee to access.