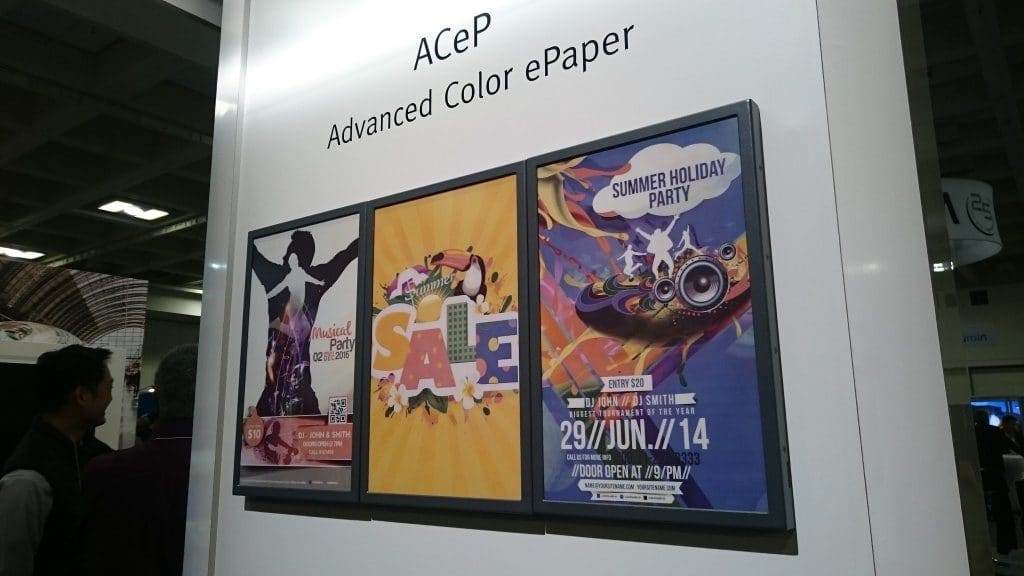 In 2016 E-Ink developed a new breed of e-paper called ACEP, which stands for Advanced Color ePaper. It features a high quality, full color reflective display. For the first time ever, an electrophoretic display (EPD) can produce full color at every pixel without the use of a color filter array. It can display over 32,000 different colors and has a resolution of 1600 x 2500 pixels and 150 PPI.

Initially this technology was developed for the digital signage market and nobody has brought it to market yet. This is primarily attributed to ACEP being in the prototype stage for the past three years and the only proof of concept that exists is in a single public space in Taipei that demonstrates the benefits of ePaper being bi-stable, reflective, and low power consumption. The demo also shows how it blends into the environment and create the atmosphere perfectly which is one of the added-values.

Sources have disclosed to Good e-Reader that ACEP will not be ready for vendors to purchase until sometime in 2019. This will obviously delay this technology from being used in e-readers until 2021 or 2022.

In a comment to Good e-Reader, E-Ink stated  “E Ink does not comment on its partners’ plans or customer shipments.  Our initial product offering for ACeP displays will be in the digital signage market, where we can combine the value of low power, bi-stable displays with color, giving our signage customers more options. While ACeP is initially targeted for signage, there is future opportunity for other markets.”

The only color e-paper currently on the horizon is ClearInk. While CLEARink and E Ink share the same basic technology i.e. electrophoresis, the one thing that sets CLEARink apart is the all new ink that the company has co-developed in association with Merck along with the fitted reflective panels. Now, how do these small changes make a huge impact, you ask? Well, these changes might seem small from an installation point of view but make no mistake, these changes are very significant and are the core reasons why the images on CLEARink display appear sharper than the ones displayed on E Ink.

CLEARink Displays CEO Frank Christiaens even mentions that the whites on CLEARink Display offer significantly higher reflectance (twice as much) making them whiter than the ones on E Ink!

Speaking of which, instead of using two different particles or pigments for the blacks and whites (like E Ink), CLEARink uses just the black pigment for getting the black slate; the total internal reflection (TIR) on the front surface takes care of the whites.

This yields a sharper, clearer image with a better contrast while consuming less power. Unlike E Ink, CLEARink can provide colored images with an LCD layer overlay thus supporting 4096 colors (as per the reports). In doing so, it might consume more power than your average E Ink displays but consumes 80-90% less power compared to a regular LCD display. As mentioned above CLEARink also has the ability to display videos with a refresh rate of 30+ Hz. Now, you might ask, ‘what about the Advanced Color ePaper Display (ACeP) from E Ink?. The slow and lethargic refresh speed is what made it undesirable for e-readers. This is where the 30+ Hz refresh rate of CLEARink comes into play!

Clearink will be released sometime this year, although a specific release date is unknown. I was told they have three or four companies that have already signed contracts to employ it in e-readers, tablets and other consumer electronics. Exactly who these companies are and what they intend on doing with the tech is currently unknown.

I find it tremendously disheartening that there are only two companies actively developing color e-paper. One has never released a single product and the other has experienced years of non-stop delays. Of course you can never truly discount Liquavista, which is owned by Amazon, but this technology has been in limbo since they purchased in in 2013. The only things Amazon has done with the technology is build an executive team in China and the Netherlands in 2016.